[MAM Note: Through a mutual friend, Caroline Baldwin, I get to vicariously experience the adventures of Ellie George in upstate New York. Although she did see loons on this trip, the highlight was her (safe) encounter with a bear.]

I went to Bear Pond today to monitor the loons. I don’t really like to go to Bear Pond because it is too far from my house (an hour and a half drive), the loons are skittish, and the banded loon has very difficult bands to read with letters and numbers. Also, all the land surrounding the pond is owned by a Boy Scout camp, and a couple of years ago a camp counselor gave me a hard time and asked me to leave the pond, stating that the scouts owned the whole pond and I was not allowed on it. He was not correct, and after contacting the DEC about this they spoke with the scouts and told them that if the public gains access to the pond right by the road bridge, they have the right to paddle the pond, but not to get out on shore except at the bridge. That is what I have always done. 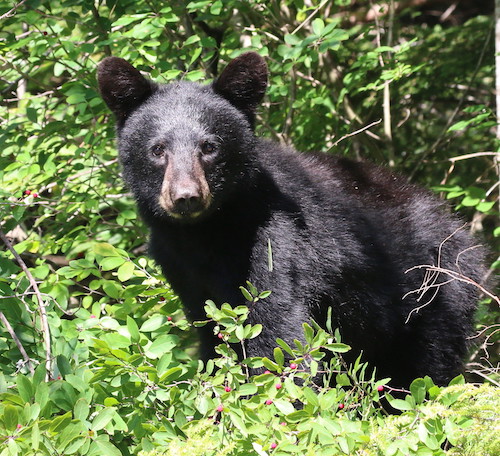 I got up early and arrived at the bridge in time to experience flat calm water, blue skies with puffy white clouds, and no loons in sight. I paddled south and spotted some loons in the distance, near the scout landings, of course. The loons were interacting, and one of them penguin danced, suggesting to me that it might have a chick stashed near shore somewhere. An intruder loon took flight, and I was able to sort out the north pair of loons from the south pair. The north pair had the banded loon, who yodeled which identified him as a male. I managed to see his orange band on his right leg but could not read the numbers and letters, and I discovered that he had lost the silver band on his left leg. Then I spotted the chick, about 6 weeks old. After a while the loon parents fished to feed the chick, and I was amazed at how independent the chick was. It would swim off across the pond by itself, and the parents spent more time following the chick than the chick did following them, which is the more usual pattern of loon behavior.

Finally, I was satisfied that I had done the best I could do without disturbing the loons excessively, so I paddled back toward the bridge. A black animal was scampering across the bridge, and I dropped my peanut butter sandwich and grabbed my camera. I snapped off a few fuzzy images and paddled fast to see if I could get another glimpse of the small bear, while looking down the road to see if Momma bear might be accompanying her youngster. As I neared the bridge, I was sorry to see no more signs of any bears, but then I heard it. Loud crashing and snapping sounds emanated from the brush less than 20 feet from my canoe! 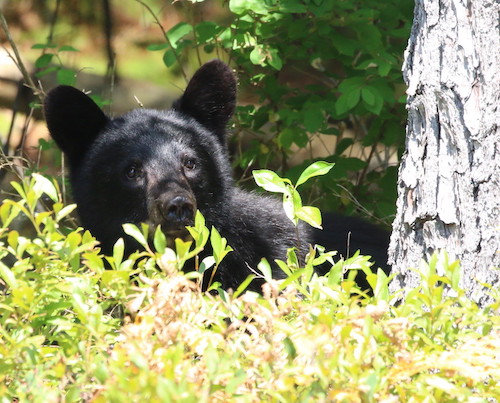 Now came a dilemma: do I grab my paddle and back-peddle away from the sounds, or do I grab my camera and hope to photograph a very close wildlife encounter? I figured that a bear would rather run away through the woods than swim across a lake if it wanted to escape. I also knew that I only had an instant to make a decision because the crashing critter was almost out in the open by the lake shore. Was it Momma Bear, Baby Bear, or both? What would you do?

I grabbed the camera. My heart was pounding as black fur emerged through the bushes. Then part of a head appeared, and it looked like the bear was eating red berries on the bushes. I was taking photos, not yet sure how big the bear was that I was photographing since it was partly obscured by branches. Then the bear peeked out through the bushes and looked at me, and I could see that it was young, maybe a small yearling or a big cub. I didn’t hear any other sounds while the bear and I checked each other out, so that suggested that Momma was not around. Whew!

I kept taking photos while Bear looked at me, and finally he turned and scooted back into the brush, moving south along the lakeshore. As my heart rate slowed a bit, I wondered if the bear might come back down toward the shore to feed on more berry bushes, so I paddled south and listened intently. Again, I heard some crunching sounds, so I paddled closer to the sound, but not too close because I didn’t want to scare the bear. I spotted him climbing up a small shrub and riding it down to the ground, eating the red fruits on the branches. That was what made so much noise, the pushing of the shrubs against other trees and shrubs and then down to the ground. I watched and photographed Bear while he ate fruit and kept an eye on me. We had both learned from our initial encounter that neither one was a threat to the other, and Bear cautiously let me watch him move along the shoreline and feed. I watched him for about 10 minutes before he moved further back away from shore and I couldn’t see him anymore.

I have seen loons on Loon Lake. I have seen eagles on Eagle Lake, and deer at Deer Pond. Now with a bear at Bear Pond, I am really on a roll, and I should probably visit Moose Pond or Wolf Pond soon!