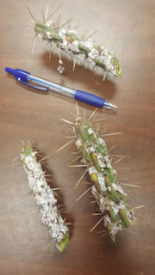 Waxy white clumps produced by cochineal scale on cholla. (Photo by S. Moran)Question: What’s the white cottony stuff growing on my cholla cactus? And should I do anything about it?

Answer: Although it looks like cotton fibers, that stuff is actually a fine wax produced by adult cochineal scale insects, and little black specks may be their nymphs. It’s common around these parts on cholla (Cylindropuntia spp.) and prickly pear (Opuntia spp.) cacti. The similar-looking white beards on other cacti, like the Peruvian old man (Espostoa lanata) and Peruvian old lady (Espostoa melanostele), are normal, healthy modified tissues, not an insect product. The white waxy coating made by cochineal scale on landscape chollas and prickly pears helps protect these true bugs from predators—and insecticides.

I’ve seen prickly pear pads almost completely covered in that white fluff. It’s more common to find mild infestations, like the ones Doña Ana County Extension Master Gardener Dael Goodman and I examined in Las Cruces earlier this week. We have several native species of prickly pear and cholla here in New Mexico. The Goodmans’ front yard has several of each, and we noticed right away that the cochineal scale was a problem for some species more than others.

Cochineal scale insects on this prickly pear pad produce this fluffy white material. (Photo by M. Thompson)Cochineal scale can kill your plant if it gets out of control. You can fight insect populations using water and a simple spray nozzle to push excess cotton off the pads and cholla sticks. NMSU Extension Entomology Specialist Dr. Carol Sutherland recommends holding off on using topical or systemic insecticides this late in the season because they aren’t likely to be effective. Find links to Sutherland’s helpful guide entitled “Scale Insects & Their Relatives” and other resources in this week’s post at https://nmsudesertblooms.blogspot.com/.

No matter what time of year, topical insecticides, including organic options like petroleum oils and insecticidal soaps, aren’t likely to help if the white coating is protecting the insects. Also, consider that the end goal isn’t to eradicate all cochineal scale from your garden—partly because that’s impossible—but rather to keep the insect pest populations in check until beneficial insects show up to the rescue.

If you squish a glob of the white stuff with healthy females hiding inside, you’ll be amazed to see a bright red liquid that seems to come out of nowhere. Cochineal scale insects produce carmine inside their bodies, which is a natural dye used for centuries for coloring fabrics and making art. Check product labels for this carmine ingredient because it is also used in red foods and cosmetics, such as sausages, lipstick, pie fillings, and brightly colored alcoholic liquids. It was used to make the bright color of Campari liquor until 2006 when the company switched to an artificial dye, but a new wave of craft distillers and other producers are using it more and more as an alternative to synthetic red ingredients.

Goodman and I tried to get a video of the oozing red liquid using a little stick to squish the fluffy white tufts on her prickly pear pads, but we barely saw any signs of red. This might be because the female cochineal population is dwindling at this time of year, or those particular tufts could be so old that the inhabitants are long gone and just left that waxy stuff behind. We’ll try again in the summer with a fresher sample.

Cane cholla (Cylinropunia spinosior) in Truth or Consequences. (Photo by M. Thompson)In his beautiful reference book Flowering Plants of New Mexico, Robert DeWitt Ivey describes six species of cholla and seven species of prickly pear. Five of those prickly pears are yellow-flowered. Paying careful attention to the pad sizes and spine details can help with identification. If you’re going to get very close, plan ahead and bring tongs.

Marisa Thompson, PhD, is the Extension Horticulture Specialist for New Mexico State University and is based at the Agricultural Science Center at Los Lunas.