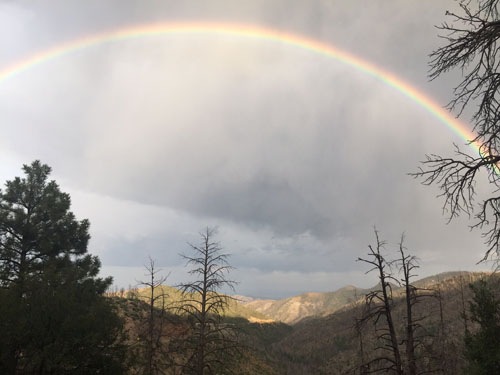 This rainbow was seen at Emory Pass in the Gila National Forest on July 5, 2017. (The photograph was provided courtesy of the United States Forest Service.)

Rainbows bring smiles to many throughout Grant County. Perhaps even on Rainbow Road in San Lorenzo or on one of the more than 35 other roadways in New Mexico with the name “rainbow."

But, according to information on a website produced by the NASA Jet Propulsion Laboratory for the National Oceanic and Atmospheric Administration (NOAA), “A rainbow isn’t really a ‘thing’ and it doesn’t exist in a particular ‘place.' It is an optical phenomenon that appears when sunlight and atmospheric conditions are just right – and the viewer’s position is just right to see it.”

“A rainbow is caused by sunlight and atmospheric conditions,” continued the statement from the NASA Jet Propulsion Laboratory. “Light enters a water droplet, slowing down, and bending as it goes from air to denser water. The light reflects off the inside of the droplet, separating into its component wavelengths – or colors. When light exits the droplet, it makes a rainbow.” 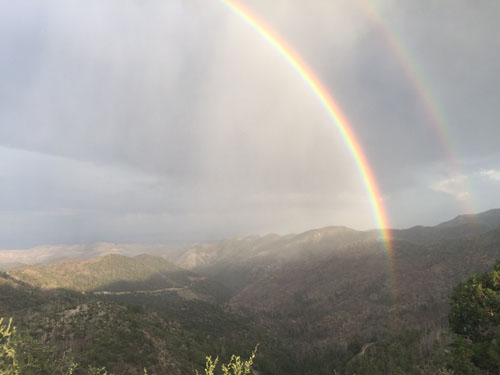 Emory Pass in the Gila National Forest was the scene of a double rainbow on July 6, 2017. (The photograph was provided courtesy of the United States Forest Service.) 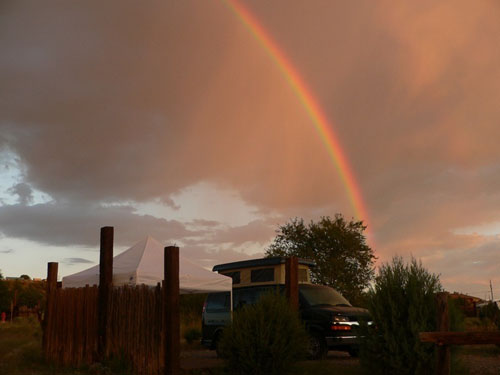 The day started with a rainbow appearing during sunrise in Silver City on September 26, 2005. (The photograph was provided courtesy of Terry Wood.)

“A rainbow requires water droplets to be floating in the air,” according to a website produced by the NASA Jet Propulsion Laboratory for NOAA. “That’s why we see them right after it rains. The Sun must be behind you and the clouds cleared away from the Sun for the rainbow to appear.”

There’s actually a specific pattern of colors that appear in rainbows, according to the statement from the NASA Jet Propulsion Laboratory: “Sunlight is made up of many wavelengths – or colors – of light. Some of those wavelengths get bent more than others when the light enters the water droplet. Violet (the shortest wavelength of visible light) bends the most, red (the longest wavelength of visible light) bends the least. So, when the light exits the water droplet, it is separated into all its wavelengths. The light reflecting back to you…from the water droplets will appear separated into all the colors of the rainbow! Violet will be on the bottom and red on the top.” 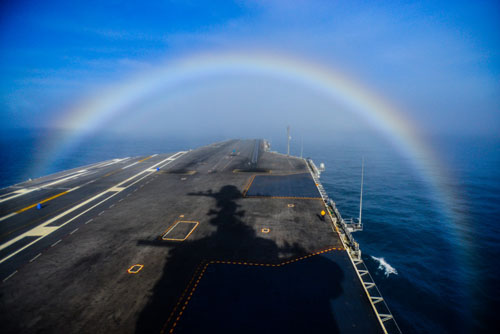 “A rainbow forms over the bow of the Nimitz-class aircraft carrier USS John C. Stennis (CVN 74),” according to the United States Navy. This vessel was in the Pacific Ocean on February 3, 2015, “undergoing an operational training period in preparation for future deployments.” (The photograph was taken by Mass Communication Specialist 3rd Class Ignacio D. Perez and was provided courtesy of the United States Navy.) 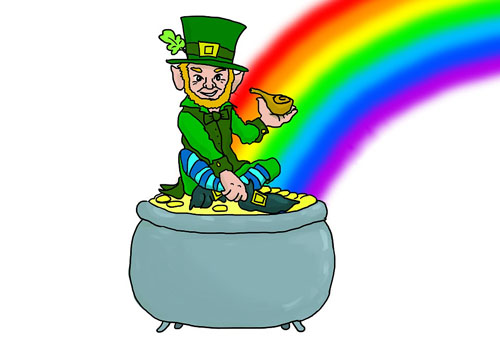 A leprechaun is seen guarding his pot of gold at the “end” of a rainbow in an undisclosed location. (This image was provided courtesy of Ms. Lilly Cantabile through Pixabay.)

You may be aware of the folk legend held by people of Irish heritage (among others) that indicates that there is a pot of gold at the end of a rainbow. Folklore details that these pots of gold were hidden at the end of rainbows by leprechauns.

The Indiana State Sentinel of Indianapolis noted in a news article dated July 31, 1889, that “…of all Irish [fairies]…the most exasperatingly impish practical joker is the leprechaun.” The Leavenworth Times of Leavenworth, Kansas, detailed a report in a news article dated April 23, 1887, that “the leprechaun is a cute little fellow, not an inch more than twelve inches high, who dances and flits through the meadows like a fitful sunbeam.”

Thus far, no one has acknowledged finding a pot of gold at the end of any rainbow. (It should be noted that it would be unlikely for people who just found a pot of gold to publicly acknowledge that they now own such a quantity of the precious metal. Plus, the legend indicates that the leprechauns that guard the pots of gold might not be so happy to relinquish their treasures.)

According to a news article dated July 4, 1896, in The Newcastle Weekly Courant of England, “English tradition has it [that] fairyland itself lies at the end of the rainbow.”

Whether following Irish, English, or another culture, it’s not likely you’ll ever get to the end of a rainbow on the ground. That’s because, according to the NASA Jet Propulsion Laboratory, “A full rainbow is actually a complete circle, but from the ground we see only part of it. From an airplane, in the right conditions, one can see an entire circular rainbow.”

If you do find a pot of gold at the end of a rainbow, please let us know.