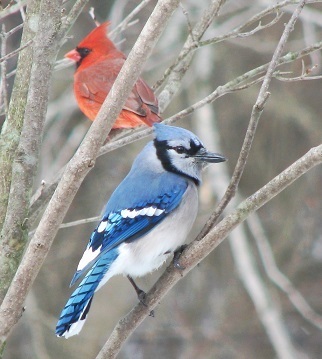 A blue jay and a cardinal on tree branches in 2012. Photo courtesy of Mary Ellen St. John through Flickr.

If you enjoy watching or going to Major League Baseball or National Football League games in the United States or Canada, you may have seen the Blue Jays, the Cardinals, and the Ravens in action. That is, the Toronto Blue Jays and the St. Louis Cardinals (both in the MLB) and the Arizona Cardinals and the Baltimore Ravens (both in the NFL). These professional sports teams were named after species of birds.

Three local streets in one neighborhood in Grant County were also named after these three birds, the blue jay, the cardinal, and the raven. Other area roadways are named after other birds.

Bluejay Lane, Cardinal Lane, and Raven Drive are located off of Fowler Avenue in Silver City. 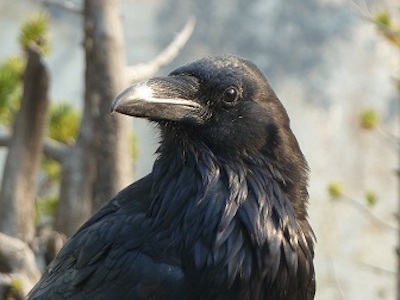 A raven is seen in Yellowstone National Park in 2012. Photo courtesy of Reb Kilde through Pixabay.

The same report indicated that Common ravens are, well, common and have permanent residence in the Gila National Forest. Chihuahuan ravens, however, are uncommon; they appear to visit the Forest during the winter.

“Blue jays and squirrels cache acorns in the Fall and return to eat them in the Winter,” according to a report issued by the Rocky Mountain Research Station of the United States Forest Service in 2019.

Beyond acorns, blue jays are also noted for eating nuts, seeds, grains, and insects, according to the U S Department of Agriculture (USDA).

“It has also been shown that the jay occasionally preys upon the eggs or young of other birds, and some observers have declared it an habitual nest robber and thief,” stated a report included in the Yearbook of the USDA, publication date uncertain.

Blue jays are also prey for other animals. The peregrine falcon, for example, enjoys eating blue jays, among other birds. “Prey is usually selected in relation to availability,” according a report issued by the Fire Sciences Laboratory at the Rocky Mountain Research Station of the United States Forest Service in 2019. “Thus, peregrine falcon diets are highly variable by region. Major foods in urban areas include many native and nonnative passerines such as northern flickers, blue jays, American robins, mourning doves, rock pigeons, and European starlings as well as riparian birds if the city is near a major water source.” [Please note that scientific names were not included in this quote.]

“Ravens are one of the largest-bodied of all songbirds and are one of the most bold, active, noisy and aggressive of all birds,” Rob MacDonald of the Alaska Region of the Forest Service said. “They have spectacular aerobatic flights in which pairs dive to the earth like falcons or turn over and over in a series of somersaults and sometimes circle for hours like eagles.”

Nature can be quite nasty in the real world.

According to MacDonald, ravens are quite crafty with their intellect.

“I’ve seen ravens steal eggs from cliff-nesting seabirds,” explained MacDonald. “Then, when the adult tries to defend the nest, the raven settles for taking the adult bird and feeds on it. I’ve watched ravens pick up clams, fly into the air and drop them on rocks to break them so they can eat the contents.”

While the raven and the blue jay are not the official birds of any state, the cardinal – more specifically, the Northern cardinal – is the official state bird of seven states. These states include Illinois, Indiana, Kentucky, North Carolina, Ohio, Virginia, and West Virginia.