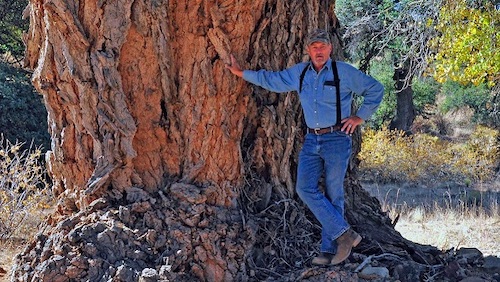 Steve Douglas is seen in front of a large Cottonwood Tree in the White Signal area of Grant County in November of 2011. “The tree was about 34 feet in circumference,” according to Mr. Douglas. (Photo was provided by Steve Douglas.)

The Cottonwood tree was one of 21 trees considered to become “America’s National Tree” through a vote by Americans through the Arbor Day Foundation. The vote through the non-profit organization took place in 2001. The Cottonwood tree did not win the vote; instead, the Oak tree was selected as “America’s National Tree” at that time. According to the Arbor Day Foundation, the Cottonwood (Poplar) tree received 6,710 votes of the 444,628 votes counted by the organization. To put the number in perspective, the organization reported that the Oak tree received 101,146 votes.

Various species of Cottonwood trees are located along waterbodies throughout large sections of the United States.

“The riparian vegetation [including Cottonwood trees] along the upper Gila River in southwestern New Mexico has high richness of woody plants and extremely high densities of nesting birds including the Federally endangered and threatened species,” according to the Rocky Mountain Research Station of the United States Forest Service.

According to a report issued by the U S Forest Service in 2018, “the Salt River Project and Army Corps of Engineers either removed or planned removal of extensive stands of cottonwoods...along watercourses, including the Verde and Gila Rivers, in Arizona, to ‘salvage’ water and ‘enhance’ river flow.” This report detailed that this practice began along the Verde River in the 1960s; the program to remove these trees ended more than ten years later because it was found to have no major impact on water flow.

Wild fires create major problems for Cottonwood trees, according to the U S Forest Service. “Most, if not all, above-ground mortality occurs immediately after fire,” stated a report from the U S Forest Service. “In areas where fire severity is high (all organic matter is consumed on the forest floor), all cottonwoods and other woody species are top-killed.”

“Riparian-nesting birds rely on cottonwoods and other native trees for foraging and nesting sites and are vulnerable to climate change effects and loss of habitat from other disturbances,” stated the Rocky Mountain Research Station of the U S Forest Service.

Among the birds that utilize Cottonwood trees as their homes or as way stations, according to the U S Forest Service, are species of Quails, Hawks, Swallows, Wrens, and Doves. In addition, the U S Forest Service reported that certain types of birds, sometimes best known by Americans through television cartoons, also utilize Cottonwood trees, including Cuckoos, Roadrunners, and Woodpeckers. 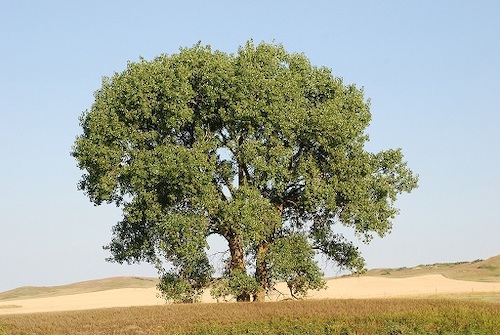 A Cottonwood Tree is seen here growing in Wibaux County, Montana, on August 19, 2015. (This photo was provided courtesy of the Natural Resources Conservation Service.)