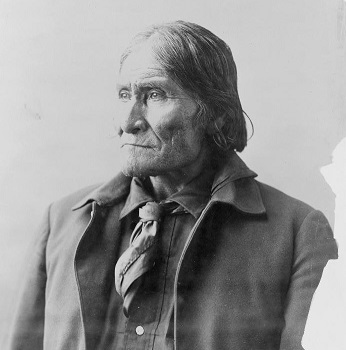 Geronimo in a photograph, circa 1898, produced by Mr. Frank Rinehart. (The photo was provided courtesy of the Library of Congress.)

Many people have heard the term “Geronimo!” yelled as some type of action occurs.

What some may not realize is that the term is based on the actions of one man – a man who took the name “Geronimo” – as he fought Mexican soldiers.

“Geronimo was not a chief, but a medicine man of the Bedonkehe band of the Chiricahua Apache,” according to the National Park Service. While he was not a chief of a tribe, Geronimo stated in his own words that after a battle in Mexico, “I was surrounded by the Apache braves and made war chief of all the Apaches.”

His birth name, according to the National Park Service, was Goyakla; it meant “one who yawns.” In his autobiography, though, Geronimo stated that his birth name was “Go khlä yeh” and that he was born in No-doyohn Cañon, Arizona, in June of 1829. The autobiography was published in 1906; the text in the book was “taken down and edited” by Mr. Stephen Melvil Barrett, Superintendent of Education, Lawton, Oklahoma.

“As a young man, Geronimo had lost one of his wives, some of his children [other reports indicate that the number of children killed was three], and his mother to a massacre carried out by Mexican soldiers,” noted the report from the National Park Service. “He would never forgive the Mexican people for this nor forget his hate for them.”

Geronimo participated in a battle to avenge the deaths of his mother, wife, and children.

“During the battle, Geronimo did not fire arrows from cover as many of the other Apache did,” according to the National Park Service. “Instead, he ran zig-zag at the Mexican soldiers so as not to be hit by their bullets. He would then kill them with a knife and take their rifles back to other Apache warriors, as he did not know how to use a rifle at this point. The Mexican soldiers began to shout ‘Geronimo!’ to warn each other of his charges.”

A slightly different explanation is provided by the Geronimo Trail Scenic Byway: “When the Apaches attacked the town [in Mexico] in revenge, Geronimo fought so wildly that the Mexicans cried out to San Geronimo (Saint Jerome) for aid. The name became applied to Geronimo and stuck.”

From that point forward, “the Chiricahua Apache began to chant the name in enthusiasm and intimidation,” continued the report from the National Park Service.

The Apaches did not actually use “Apache” to describe themselves, according to the National Park Service: “Apaches instead referred to themselves with variants of ‘nde,’ simply meaning ‘the people.’”

The Chiricahua Apache fought both Mexican and American military units as well as civilians in both countries as they sought to remain independent.

Leaders and average citizens alike in Mexico and the United States saw the Chiricahua Apache as an enemy that needed to be removed so that settlement of the region could proceed. “Removal” took several forms, including banishment to reservations, being held as prisoners of war in military installations, and being killed.

The National Park Service reported that both Mexico and the United States made an agreement that the military of either country could cross into the other’s territory to pursue, capture, and kill Chiricahua Apache.

Geronimo, still a prisoner of war, died in Fort Sill, Oklahoma in 1909.

“In 1913, after twenty-seven years of imprisonment the Chiricahua were finally set free and were no longer prisoners-of-war,” according to a report from the National Park Service. “One-third opted to stay at Fort Sill, while two-thirds moved to the Mescalero Apache Reservation, in New Mexico. At the time of Chief Cochise, the Chiricahua Apache had numbered 1,200. At the end of the war, in 1886, they numbered 500. By their release they numbered only 261. Today [as of August of 2018] there are…[more than] 850 Chiricahua Apache.”

In Grant County, Geronimo Street in North Hurley and the Geronimo Trail Scenic Byway are both named after Geronimo. The Byway includes the part of State Route 152 in Grant County from San Lorenzo to the border with Sierra County. 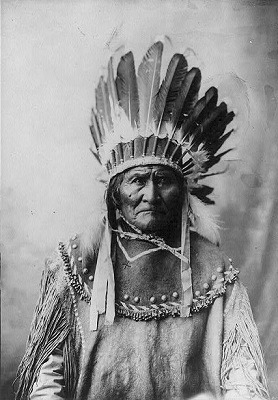 Geronimo as seen in a photograph from circa 1907. (The photo was provided courtesy of the Library of Congress.)