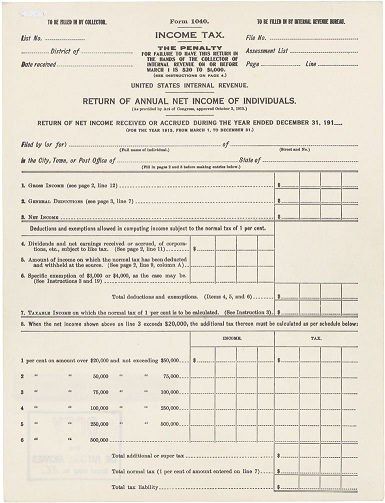 This is what the first Form 1040 looked like in 1913. (The image was provided courtesy of the National Archives.)

Residents of Grant County have officials in Santa Fe (as well as Dover and Cheyenne) to thank for having to pay the Federal income tax.

Today is the anniversary of the decision of the New Mexico State Legislature to approve the 16th Amendment to the United States Constitution. That decision in Santa Fe occurred on the same day as similar votes by legislatures in the state capitals of Delaware and Wyoming on February 3, 1913.

The 1% tax rate was assessed on taxable income (gross income minus certain deductions and exemptions) up to $20,000.00.

While few deductions and exemptions were allowed in 1913, the ones that were provided removed most Americans from having to pay any Federal income tax.

“…In 1913, due to generous exemptions and deductions, less than 1 percent of the population paid income taxes at the rate of only 1 percent of net income,” according to the National Archives.

In addition to the “normal tax,” there was an “additional or super tax” on taxable incomes greater than $20,000.00.

The highest Federal income tax rate was 37% in 2019. (Of course, there are a wide variety of deductions, exemptions, and other items in today’s tax code. And the Federal income tax is only one of the federally-mandated taxes based on income.)

In those years, the highest marginal tax rate for Federal income taxes was 94%. 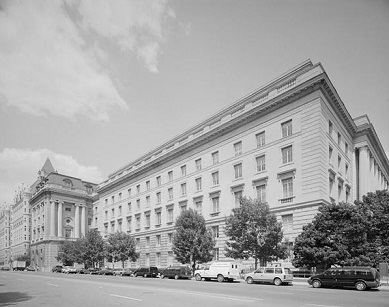 The headquarters of the United States Internal Revenue Service as seen in 1991. (The photo was provided courtesy of the Library of Congress.)