The Chronicles of Grant County
02 September 2020 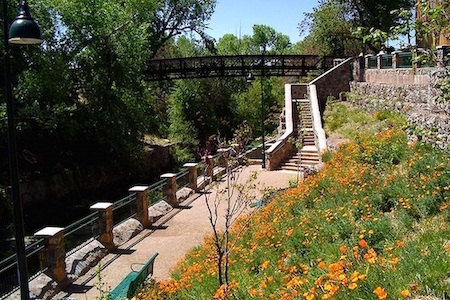 Poppies in various shades of orange are in bloom at the Big Ditch Park in Silver City. (The photograph was provided courtesy of Mary Alice Murphy.)

The Town of Silver City transformed much of the site of its former Main Street into the Big Ditch Park. The transformation into a passive recreational area took a number of years. From pioneer days when non-locals arrived in Grant County, this section of land was repeatedly the scene of floods. Many were modest in size; some were substantial events where water flooded throughout the Downtown area and basically took out Main Street. Floods in 1895 and 1903 were especially devastating to the people, homes and Silver City.

Lands along the San Vicente Arroyo were incorporated into the Big Ditch Park. Many of these had originally contained stores, houses, and other buildings. A number of the structures on these lots were destroyed by flood waters as Main Street disappeared as a functioning roadway in this section of Silver City.

In 1977, news reports indicated that local folks in Silver City began an organized effort to create a park within the floodplain traversing the Downtown area. Support was sought from both state and Federal governmental sources.

The Town of Silver City dedicated and officially opened the Big Ditch Park on November 8, 1980. Through the years, a variety of fairs and festivals have been held in the Big Ditch Park. These have ranged from fairs featuring arts and crafts to festivals highlighting the Hispanic heritage of Grant County.

The blooms of flowers and flowering plants add vivid color to the park. From the Spring to the Fall, nature provides scenery that encourages people to stroll along the walkways within the Big Ditch Park. Trees provide shade. Benches are provided for people to sit a spell while enjoying the surroundings. Footbridges allow residents and visitors alike to cross the Big Ditch as they go from street to street in the Downtown of Silver City. Entrances to the park are found at the end of several roadways, including Market Street, Kelly Street, Sixth Street, and Seventh Street.

When tourists come to Grant County, many stop by the Big Ditch Park. Newspapers and digital news sites highlighting travel to Silver City have prominently featured this park. News articles have been published in such cities as Austin, El Paso, Phoenix, Seattle, and Tucson. Even during the Pandemic of 2020, newspapers in California, Louisiana, New Jersey, Virginia, and Wisconsin highlighted travel to Silver City in May of this year. The key photo used to illustrate the Town was a photograph of the Big Ditch Park. 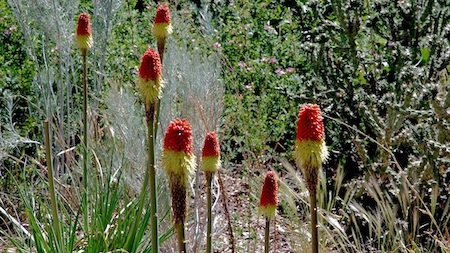 Vegetation lines the natural areas of the Big Ditch Park in Silver City. (The photograph was provided courtesy of A J Brittain through Flickr, May of 2018.)