The Chronicles of Grant County
10 September 2020

The Chronicles Of Olc 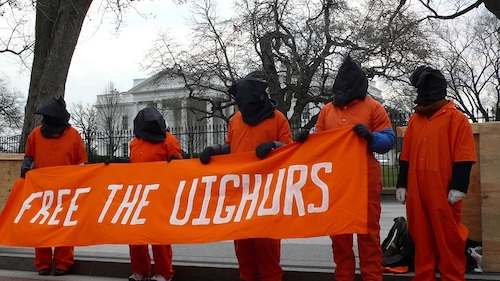 Protesters were seen in front of The White House in Washington, District of Columbia, on January 26, 2009. (This photograph was provided courtesy of Mike Benedetti, 2009.)

Notwithstanding the temporary closure of houses of worship because of the Pandemic of 2020, most people in Silver City and Grant County would find it offensive to think that they would be prohibited from exercising their religious beliefs – or that others within the community were denied the right to exercise their religious beliefs. Yet, in China, such policies effectively control the lives of the Chinese people.

According to Freedom House, in 2019, the Chinese government "…increased restrictions on religious practice[s] by Chinese Buddhists, Christians, and Muslims throughout China under 2018 regulations on religious affairs, and persecution of the banned spiritual movement Falun Gong continued unabated two decades after its launch."

Freedom House describes itself as "a nonpartisan 501(c)(3) [non-profit] organization." According to a timeline of its history, on November 10, 1941, "Freedom House [was] founded by a group of prominent individuals, including journalists, scholars, political figures, and labor leaders. [First Lady] Eleanor Roosevelt and [former Republican Presidential candidate] Wendell Willkie…[served] as honorary co-chairpersons." The organization is headquartered in Washington, District of Columbia.

"The [Chinese] government's persecution of predominantly Muslim ethnic minorities in Xinjiang remained severe, with an estimated one million or more individuals subjected to extralegal detention in 'political reeducation' centers and tens of thousands sentenced to prison terms by the courts," Freedom House detailed in its report on key developments in China in 2019. "Credible reports of abuse and deaths in custody emerged during the year, even as authorities shifted some focus from mass detention to forced labor. Leaked documents shed light on the role of [President] Xi [Jinping] and regional leaders in driving the campaign, and on the inner workings of Xinjiang's advanced surveillance systems."

Detailing the functioning of the Chinese government, Freedom House reported that "Conditions in Xinjiang had deteriorated sharply since 2017, when human rights groups estimated that more than one million ethnic Uighurs, Kazakhs, and Hui were detained in an expanded network of 'reeducation' centers to undergo political and religious indoctrination. The number and size of orphanages and boarding schools have also been expanded to absorb minority children who have been sent away for immersive Chinese-language education or whose parents are being detained indefinitely. Han Chinese officials throughout the region have reportedly stayed in the homes of Uighur families to monitor and indoctrinate them, and it is evidently common for male officials to reside in close quarters with women and children whose adult male family members are in detention. Cases of torture, forced abortions, sexual abuse, and deaths in custody at the reeducation camps and other detention facilities were reported during 2019."

Freedom House noted a number of steps taken by the Chinese government against members of various religious faiths in China, including examples of persecution against Catholics, Protestant Christians, Tibetan Buddhists, and others.

"The especially intense and intrusive curbs on the practice of Islam in Xinjiang, which are apparently aimed at breaking down the religious identity of Muslims in the region, have affected the wearing of religious attire, attendance at mosques, fasting during Ramadan, choice of baby names, and other basic forms of religious expression," according to the report from the Freedom House. "In 2019, the authorities continued to punish peaceful religious practices under charges of 'religious extremism,' resulting in detention and indoctrination for many Uighur, Kazakh, and Hui Muslims…The regime's 20-year campaign to eradicate the Falun Gong spiritual group continued in 2019. Hundreds of Falun Gong practitioners have received long prison terms in recent years, and many others are arbitrarily detained in various 'legal education' facilities. Detainees typically face torture aimed at forcing them to abandon their beliefs, sometimes resulting in deaths in custody."

The extent of the evil practiced by the Chinese leadership in Xinjiang can be found in the statistics cited by Freedom House: "Official figures published during 2019 showed that courts in Xinjiang, where Muslim minorities make up a majority of the population, sentenced more than 230,000 people to prison or other criminal punishments in 2017 and 2018, a higher per capita rate than other parts of China; a much larger percentage of convicts were sentenced to terms of more than five years in Xinjiang than elsewhere [in China]."

This news column is the fourth of several news columns that will focus on other aspects of how President Xi Jinping and China implement and maintain a system that allows evil to thrive and harm the Chinese people.

Do you have questions about China and its olc?

How Christians are persecuted? How Muslims are "re-educated"?

How journalists are imprisoned? How members of Falun Gong are tortured?