The Chronicles of Grant County
11 September 2020

The Chronicles Of Olc 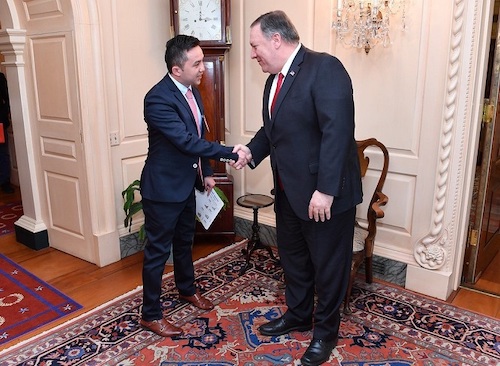 The Secretary of State of the United States of America, Michael Pompeo, was called "a brazen liar" by Zhao Lijian, Deputy Director of the Chinese Ministry of Foreign Affairs Information Department, on July 1, 2020. This, according to a transcript of a news conference issued by the Embassy of the People's Republic of China in the State of Qatar.

At a news conference on July 22, 2020, Wang Wenbin, spokesperson for the Ministry of Foreign Affairs of China and the Deputy Director of the Foreign Ministry Information Department of China, answered a question from a journalist about the statements of the French government regarding the situation in Xinjiang.

According to a transcript of that news conference provided by the Embassy of the People's Republic of China in Solomon Islands, Deputy Director Wang stated that "The Chinese side has repeatedly responded to and rebuked the false reports and accusations surrounding Xinjiang. The issue concerning Xinjiang is by no means about human rights, religion or ethnicity, but about combating violent terrorism and separatism. I would like to take this opportunity to talk at some length about the real human rights situation in Xinjiang."

He then detailed the existence of what some have called "concentration camps." He explained that these are actually educational facilities. That China respects its citizens rights of expression and religious liberties.

"Let's begin with the lie calling the vocational education and training centers in Xinjiang concentration camps where up to one million Uyghurs are detained," stated Mr. Wang. "So what is the truth? The truth is that the vocational education and training program is a meaningful and useful exploration in preventive counter-terrorism and deradicalization. The aim is to eradicate extremism and prevent the escalation of violent terrorist activities. The basic principle of respecting and protecting human rights in accordance with China's Constitution and law is strictly observed in these centers to guarantee that the personal dignity of trainees is inviolable. Personal insult and maltreatment in any way is strictly prohibited. All trainees enjoy freedom of movement. The centers are run as boarding facilities and trainees can go home and ask for leave to tend to personal businesses. Trainees' right to use their own spoken and written languages is fully protected. All rules, regulations, curriculum tables and menus are in the common language and languages of ethnic minorities. The customs and habits of different ethnic groups are fully respected and protected. A variety of nutritious halal food is provided for free to trainees of ethnic minorities. Freedom of religious belief is fully respected and protected. Trainees can decide on their own whether to attend legitimate religious activities when they go home."

In his remarks, Mr. Wang denied the extent of the numbers of Uyghurs at these "vocational education and training centers."

"The part about one million Uyghurs detained is also a groundless lie," stated Deputy Director Wang. "This sensational rumor was first started and spread by the Network of Chinese Human Rights Defenders, a non-governmental organization supported by the U S government. This organization, based on interviews with just eight Uyghurs and rough estimates, concluded that one tenth of the 20 million people in Xinjiang are detained in the so-called re-education camps. Such a shoddy technique is just preposterous."

Mr. Wang dismissed accusations that China denies rights to any of its citizens based on heritage.

"Now let's turn to the lie of discrimination against ethnic minorities in Xinjiang," explained Mr. Wang. "What is the truth? The truth is that Xinjiang believes that the well-being of all ethnic groups is the cornerstone of lasting social stability. In this region, China's ethnic policy, the Constitution, and Law of the People's Republic of China on Regional Ethnic Autonomy are faithfully upheld. All ethnic groups are equals with the right to participate equally in the administration of state affairs and to independently manage their own ethnic affairs in their respective regions. Efforts are made to promote the unity of all ethnic groups and their common prosperity and development. This has consolidated socialist ethnic relations featuring equality, solidarity, mutual assistance and harmony. There is no so-called discrimination against ethnic minorities or wiping out of their ethnic identity."

As for reports that the Chinese government has restricted cultural practices, Deputy Director Wang stated that such reports are simply untrue.

"The government of the Xinjiang Uyghur Autonomous Region fully protects the customs and habits of all ethnic groups in diets, festivals, weddings and funerals, guarantees their right to use and develop their spoken and written languages, ensures the protection and inheritance of their fine traditional culture, encourages ethnic minority members to run for positions in public offices, and guarantees the right of people of all ethnic groups to participate in the management of state affairs on an equal footing and to independently manage the affairs of their own ethnic groups in their respective regions," stated Mr. Wang. "Xinjiang resolutely safeguards ethnic unity, and with such programs as 'Pair Up and Become Family,' promotes the harmonious coexistence, solidarity and development of all ethnic groups."

Mr. Wang indicated that China protects the religious freedoms of the people in Xinjiang, including the Muslims living in the region.

"There are also lies that religious freedom have been restricted and Muslims oppressed in Xinjiang," Director Wang said. "But what is the truth? The truth is that recently some politicians and media in the United States and the West have stigmatized the fight against terrorism and extremism in Xinjiang in accordance with law as restriction of freedom of religious belief and oppression against Muslims. They have even made up lies about the imprisonment and persecution of religious figures."

"But in fact anti-terrorism and deradicalization endeavors in Xinjiang have been conducted under the rule of law and do not target any particular ethnicity and religion," Mr. Wang continued. "Those who are punished for their crimes in accordance with law are criminals who propagate extremist religious ideas and engage in separatist, infiltration, sabotage and violent terrorist activities under the cloak of religion. They exclude and persecute religious figures who practice the idea of moderation and righteousness, take advantage of the religious feelings of the believers, spread extremism, willfully distort religious doctrines and rules, and link extremism with religion. They deny all secular concepts and achievements of modern civilization, preach that 'jihadist martyrs go to heaven,' incite the religious believers to regard all those who refuse to follow the extreme practices as 'pagans,' and turn some people into terrorists whose mind is completely controlled by them. At the same time, the government of the Xinjiang Uyghur Autonomous Region protects the freedom of religious belief of people of all ethnic groups in accordance with law and [it] is entirely up to citizens to choose whether they believe in a religion or not."

He concluded his remarks regarding this question by stating that "We welcome those with a truly objective and fair attitude to visit Xinjiang and see for themselves the real situation and avoid being blinded by these rumors and slanders."

This news column is the fifth of several news columns that will focus on other aspects of how President Xi Jinping and China implement and maintain a system that allows evil to thrive and harm the Chinese people.

Do you have questions about China and its olc?

How Christians are persecuted? How Muslims are "re-educated"?

How journalists are imprisoned? How members of Falun Gong are tortured?