The Chronicles of Grant County
23 September 2020 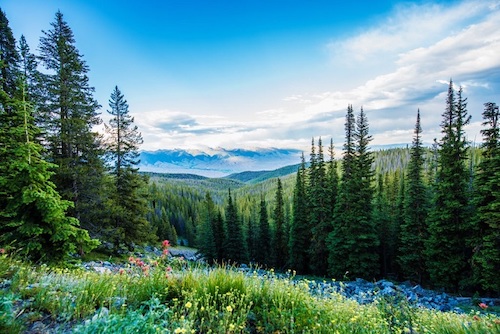 A scenic, mountain view outside of Salmon, Idaho. (The photograph was provided courtesy of the Idaho Department of Commerce – Tourism Development.)

Idaho Street is a small roadway in Silver City. It gets its name from the State of Idaho.

Some basics about this northwestern state: If you enjoy eating wild huckleberries and cutthroat trout after square dancing, you might be celebrating Idaho's state fruit, state fish, and state dance. The population of Idaho is less than that of New Mexico. The tenth largest city in Idaho, Post Falls, has about the same number of residents as does Grant County.

The source of the name "Idaho" – and the placement of the state – are stories unto themselves.

Please note that in the early 1860s, "Idaho" was also spelled as "Idahoe." For example, on March 24, 1860, the New York Herald used the spelling "Idahoe" for this word, while the Louisville Daily Courier used that same spelling in a front page news article on November 13, 1860.

At one point in 1861, Idaho was almost placed next to New Mexico. When the United States Congress discussed the creation of a territory in the lands that are now the State of Colorado, the members of that governmental body considered a number of names for the predecessor territory. Among the names considered were "Colorado," "Idaho," and "Jefferson," among other names.

On January 31, 1861, the Alexandria Gazette and Virginia Advertiser reported that "Yesterday the Senate passed a bill forming the country round Pike's Peak into a Territory, with the name of 'Idaho.'" A few days later, though, on February 4, 1861 – the situation had changed. A news article in the Brooklyn Evening Star on February 5, 1861, reported that "The bill to provide for a Government for the Territory of Idaho was taken up and passed, after the name had been changed from Idaho to Colorado."

Why the change in names?

People – including members of the U S Congress – had been told that "Idaho" was a word that the Native Americans used to describe the area as "Gem of the Mountains."

Except, almost all historical sources indicate, no Native American nation ever used the word "Idaho" to mean anything, let alone to mean "gem of the mountains." Both the Idaho State Historical Society and the Oregon Historical Society have printed news items indicating that "Idaho" was a "made up" name. Think of names like "Exxon" and "Xerox" that were created for corporations wanting unique names.

When the U S Senate found out that they were about to name the country's newest territory after a name without meaning, they changed the name of the new territory to "Colorado." (We'll discuss that name in a future edition of The Chronicles Of Grant County.)

We'll discuss further background about the name "Idaho" in the next edition of The Chronicles Of Grant County. 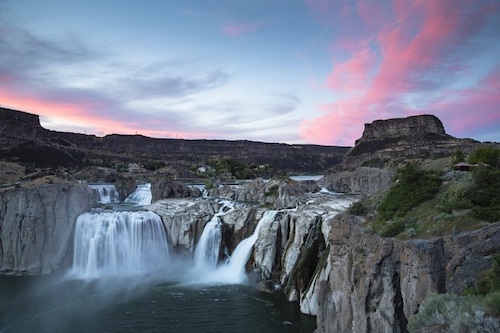 The Shoshone Falls are located in Twin Falls, Idaho. (The photograph was provided courtesy of the Idaho Department of Commerce – Tourism Development.)