The Chronicles of Grant County
30 September 2020 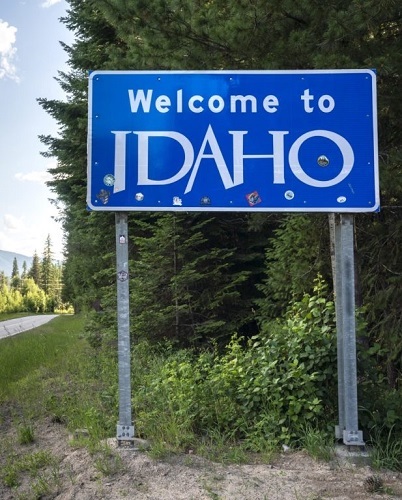 A "Welcome to Idaho" sign is located along the Pend Oreille Scenic Byway, near Sandpoint, Idaho. (The photograph was provided courtesy of the Idaho Department of Commerce – Tourism Development.)

Last week, we highlighted some aspects of the State of Idaho, the source of the name for Idaho Street in Silver City. In this edition of The Chronicles Of Grant County, we provide additional details about this name – a name that the U S Congress almost used to designate what is now the State of Colorado. Instead, in 1861, Congress decided that the name was not appropriate for the name of a new territory. Leaders had found out that what they had been told – that "Idaho" was a name used by Native Americans to mean "Gem of the Mountains" – was not true.

The concern about the source of the name "Idaho" eventually dissipated during the early 1860s. A steamboat with that name plied the Columbia River for a number of years starting in 1860. According to the Idaho State Historical Society, the local mines that developed in today's Clearwater County, Idaho, had become known as the "Idaho Mines" at that time. Washington Territory, according to today's government of Idaho County, Idaho, created Idaho County in 1862. (The lands of what is today the State of Idaho were then part of Washington Territory.) Within Colorado, "Idaho" was used as the name of a settlement (today's Idaho Springs) near Pike's Peak. It's uncertain the specific date when that name was first used for the Colorado community (initially known by various other names); it may have been 1860.

(News articles in the Mid-South of the United States in the early 1860s detailed the "Idahoe Springs" or "Idaho Springs" located near Clarksville, Tennessee. Another ship also used "Idaho" as its name in the Mid-South; this ship traveled along the Ohio River and other rivers in that region.)

Interestingly, the U S Congress initially considered naming the new Territory of Idaho as "Montana." Yes, just like "Idaho" became "Colorado," "Montana" became "Idaho." (We'll discuss that name in a future edition of The Chronicles Of Grant County.)

Years after the Territories of Colorado and Idaho were created, an individual explained how "Idaho" as a word potentially came into being. The details were provided in a Letter to the Editor of the New York Tribune on December 11, 1875. While the story is not conclusive, it appears that "Idaho" was the creation of Dr. George Willing; he appears to have created the word in 1859 or 1860.

Mr. William Stoddard, an individual who had been part of the administration of President Abraham Lincoln, wrote this Letter to the Editor with the title of "How Idaho Was Named." In his letter, Mr. Stoddard indicated that he understood that he might be spoiling "a good joke," but that the fact was that Dr. Willing was the source of the name. Dr. Willing was not a Native American. Instead, Mr. Stoddard explained that Dr. Willing "was the first delegate to Congress from the young mining community" in the Pike's Peak region. (Several sources indicated that Dr. Willing, while a candidate to a be a delegate to the U S Congress from what was then being called "Jefferson Territory," did not actually win the election.)

One of Dr. Willing's "legislative friends" asked for a suggestion for a name, according to Mr. Stoddard, for the new territory – the territory that eventually became the State of Colorado. The U S Congress did not want to officially name the new territory after President Thomas Jefferson, so an alternative name needed to be found for these lands. This gentleman asked for "Something round and smooth, new, with the right sort of meaning to it," wrote Mr. Stoddard. The Letter to the Editor indicated that Dr. Willing was someone known to be familiar with "Indian dialects" in the area. "Now it happened that the little daughter of one of these gentlemen was on the floor that morning with her father, and the Doctor [Dr. Willing], who was fond of children, had just been calling her to him with, 'Ida, ho, come and see me,'" Mr. Stoddard continued. [The child's name was evidently "Ida."] "Nothing could be better, and the veteran explorer promptly responded with the name 'Idaho.'" When asked what did the word mean, Dr. Willing responded with "Gem of the Mountains."

Mr. Stoddard ended his Letter to the Editor of the New York Tribune by stating that "Dr. Willing told me about it at the time, or soon afterward, with a most gleeful appreciation of the humor of the tiding, and I have often since heard him rehearse the story."

Regardless of how the name initially came about, people evidently liked "Idaho" as a word. Thus, when the territory became a state, "Idaho" remained as its name. Idaho – as a state in its current geographic boundaries – came into existence on July 3, 1890.

Mining has been an important facet of life in Idaho from the years before it became a territory and state. Gold, silver, and a variety of gems have all been mined in this area. According to the State of Idaho, "As the 13th largest state in the U S, Idaho produces 72 types of precious and semi-precious stones. Some of these stones can be found nowhere else in the world, which is why our great state is known as 'The Gem State.'"

Silver was also one of the items mined in Idaho. Not surprisingly, a "Silver City" was created in this state. We'll detail that community in next week's edition of The Chronicles Of Grant County. 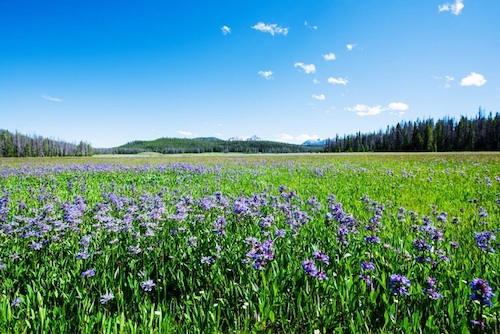 Wildflowers are seen blooming in fields off of Idaho Highway 21 outside of Stanley, Idaho. (The photograph was provided courtesy of the Idaho Department of Commerce – Tourism Development.)