The Chronicles of Grant County
14 October 2020 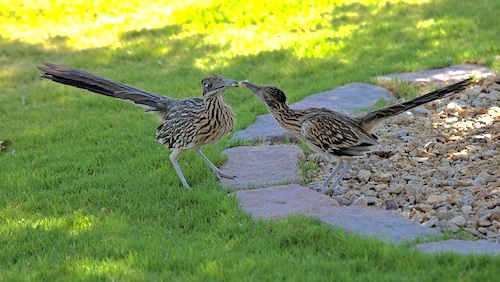 A momma Roadrunner feeding her child. (The photograph was provided courtesy of A J Brittain, June 17, 2017.)

The National Park Service indicated that a Roadrunner can run up to 17 miles per hour. Other sources have detailed that Roadrunners can run even faster.

This speedy critter – a member of the Cuckoo Family – can be found in most areas of New Mexico, including in Grant County. While roadrunners inhabit large parts of America's Southwest and sections of Mexico, the range of this bird also includes such areas as Oklahoma and Arkansas. A second type of Roadrunner – the Lesser Roadrunner – is found in Mexico and Central America, noted several entities.

A number of Native American nations consider the Roadrunner to have special attributes.

"There is probably no State Bird more closely connected to the people of the state than the Greater Roadrunner is to the citizens of New Mexico," according to a statement from the Office of the Secretary of State of New Mexico. "Early settlers for example were told that if you got lost a roadrunner would always lead you back to the path for which you were searching. Many Native American groups said that the spirit of this bird has supernatural powers. Hopi tribes used the "X" on Kachina figures to confuse evil spirits because the "X" footprint of a roadrunner doesn't show which direction the bird is traveling."

Roadrunners are well-suited to the Southwest of the United States. According to a statement from the Cornell Lab of Ornithology, "Roadrunners reach two feet from sturdy bill to white tail tip, with a bushy blue-black crest and mottled plumage that blends well with dusty shrubs."

Several organizations indicated that the diet of a Roadrunner includes such delicious items as lizards, beetles, and small birds, among other delicacies. A special treat that Roadrunners seem to enjoy are rattlesnakes.

"Greater Roadrunners eat poisonous prey, including venomous lizards and scorpions, with no ill effect, although they're careful to swallow horned lizards head-first with the horns pointed away from vital organs," continued the statement from the Cornell Lab of Ornithology. "Roadrunners can also kill and eat rattlesnakes, often in tandem with another roadrunner: as one distracts the snake by jumping and flapping, the other sneaks up and pins its head, then bashes the snake against a rock. If it's is too long to swallow all at once, a roadrunner will walk around with a length of snake still protruding from its bill, swallowing it a little at a time as the snake digests."

You can listen to several calls from Roadrunners by clicking on this webpage provided by the Cornell Lab of Ornithology.

Roadrunner Lane, located north of Silver City, gets its name from this bird. This roadway is one of more than twenty other streets in New Mexico that have been named after Roadrunners.

The name and image of Roadrunners are also utilized in a variety of commercial and governmental activities in New Mexico. We'll detail some of those activities in the next edition of The Chronicles Of Grant County. 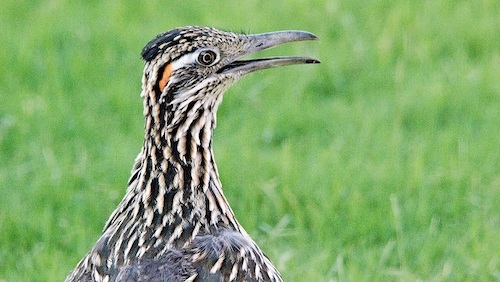 A Roadrunner in Grant County. (The photograph was provided courtesy of A J Brittain, July 18, 2019.)

A Roadrunner in Grant County. (The photograph was provided courtesy of A J Brittain, July 18, 2019.)