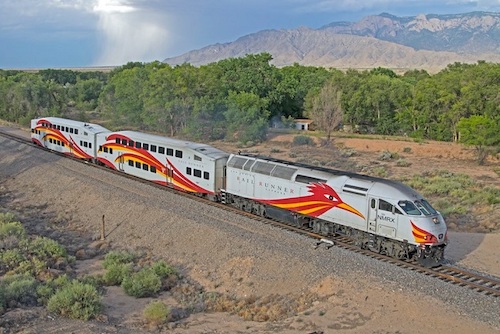 "A thunderstorm is rumbling over the mountains in the distance as a New Mexico Rail Runner commuter train heads south, north of Albuquerque," stated Steve Glischinski. See the next photo to view Mother Nature in action. (The photograph was provided courtesy of Steve Glischinski through Flickr, July 23, 2018.)

Roadrunners are not only speedy critters throughout much of New Mexico. The state bird of New Mexico can also be seen in a public transit system. The Roadrunner is utilized in the name and signage for the New Mexico Rail Runner Express passenger rail service.

According to the Rio Metro Regional Transit District, the passenger train service began between downtown Albuquerque and the Sandoval County/U S 550 Rail Runner Station in July of 2006. By 2008, the trains were operating from Belen through the State's largest city to the State capital of Santa Fe. Rail stations are also located in Los Lunas, Sandia Pueblo, and Kewa Pueblo, among other communities in Bernalillo, Sandoval, Santa Fe, and Valencia Counties.

Right now, though, you aren't able to ride this train and see the sights of central New Mexico.

"The New Mexico Rail Runner Express passenger service remains suspended due to the COVID-19 pandemic," according to a news statement issued this past week by the Rio Metro Regional Transit District. "Rio Metro officials and the Governor's reopening task force have been working on new COVID-19 operational protocols that will be instituted on the train once service resumes. The restart of Rail Runner passenger service is directly tied to how well the state is doing in slowing the spread of the Coronavirus. Unfortunately, given the recent rise in COVID cases and for the safety and health of passengers, service will remain suspended until further notice."

Once service is restored, all active duty military, veterans, and anyone with a federally-issued veteran or military photo ID will be able to once again ride the New Mexico Rail Runner Express (as well as the Rio Metro buses in the Greater Albuquerque Area) for free. Those requesting this option must show a valid ID to ride free. According to the Rio Metro Regional Transit District, accepted forms of ID include a Veteran Health Identification Card (VHIC), a Veteran ID Card (VIC), a driver's license with a veteran's designation, Department of Defense Active Duty and Dependent Military IDs, and a Rail Runner Freedom Pass.

In addition to its use in the name of the passenger train service in central New Mexico, the Roadrunner was also used for the name of a public transit system operational in the Joshua Tree National Park. During parts of 2018 and 2019, the RoadRunner Shuttle Service – with an image of a Roadrunner on each bus – provided free public transit within this National Park. The service was operated by the Morongo Basin Transit Agency based in Twentynine Palms in San Bernardino County, California.

In addition to public transit, the name and image of Roadrunners are also utilized in a variety of other commercial and governmental activities in New Mexico. We'll detail some of those additional activities in a future edition of The Chronicles Of Grant County. 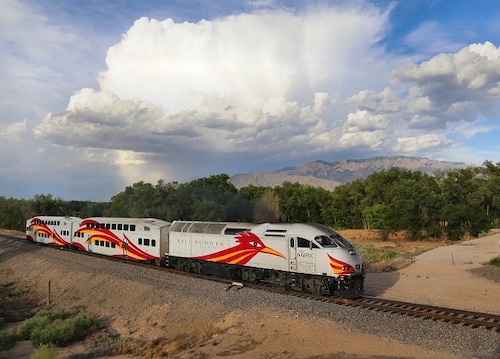 Rick Knutson took this photograph of southbound Rail Runner #517 that departed "the Sandia Pueblo station within one minute of its carded time of 6:44 PM" on the same day as the top photo. The rain clouds are now directly over the mountain. (The photograph was provided courtesy of Rick Knutson through Flickr, July 23, 2018.)

Four NEW classifieds for furniture and an REI screen house