Halloween During The Pandemic

The Chronicles of Grant County
28 October 2020

In happier times last year, children were seen trick and treating in Silver City. (The photograph was provided courtesy of Gnarly Oak Gypsy through Facebook, October 31, 2019.)

But this type of situation has occurred before. We – as a nation – have had to deal with pandemics before.

We could learn from what people did during the Pandemic of 1918-1919. Medical science was not as advanced at that time. Health care services were not as prevalent as today. But the reality of sickness and death from an unseen virus were similar. It might be useful to look back to see what decisions some communities followed during Hallowe'en of 1918.

This coming Saturday is Halloween.

Hallowe'en (an earlier spelling for the holiday) is the contraction of the wording "All Hallows Eve," the day before All Hallows Day (today known as "All Saints Day"). "Hallows" was an earlier word used for "Holy." All Saints Day is also celebrated as the "Day of the Dead" in Mexico and among Mexican-Americans in Grant County and throughout the American Southwest.

In typical years, Halloween would be a day filled with joy for many people, especially children. (For some dentists, too, but for different reasons. As a certain celebrity might say, "I kid. I kid.")

Please note that "trick or treating" by children did not typically occur at the time of the Pandemic of 1918-1919 as it does in our modern times. Parties among adults and children did take place. The giving of greeting cards was common. Other traditions also took place on Hallowe'en. A number of news reports detail how the holiday and the night before were also evenings filled with property damage. An example: Wagons overturned in Albuquerque resulted in a headline of "Halloween Pranks Land [Five] Boys In Jail" in the Albuquerque Morning Journal on October 31, 1918.

In Grand Forks, North Dakota, the local police department called off all Hallowe'en celebrations. According to the edition of the Grand Forks Herald dated October 31, 1918: "The influenza epidemic which has put a ban on all gatherings, social or otherwise, has of course prevented Hallowe'en parties indoors, and police authorities have strictly forbidden any out of doors Hallowe'en gatherings, so in the words of the disgusted small boy, there's 'nothing doing.'"

"One can put on a 'flu' mask and a bathrobe, imagine participation in a masked ball and, as a diversion, pop a dishful of corn in one's own kitchen," reported the Warren Evening Times in a news article on October 31, 1918. "That is about the only way one can safely celebrate Hallowe'en this year, according to the regulations of the Health Board." At the time of this news article, the local Board of Health had banned all public and private gatherings of any kind in Warren, Pennsylvania.

Under the headline of "Police Will Squelch All Halloween Fun," The Evening Sun of Baltimore reported on October 31, 1918, that "Acting upon the advice of Health Commissioner Blake, Marshal of Police Robert D. Carter has ordered every patrolman in the city to disperse, stop, scatter and otherwise squelch all Halloween gatherings and celebrations."

The Reno Evening Gazette reported on October 19, 1918, that "The Hallowe'en dance planned by the St. Agnes Society has been cancelled because of the influenza quarantine." The Fort Worth Record reported a similar situation in its edition dated October 30, 1918: "The Halloween party which had been planned by the Epworth League of the Central Methodist church has been indefinitely postponed."

Not all communities canceled Hallowe'en. Local news reports highlight Hallowe'en celebrations in such communities as Boston, Philadelphia, and Long Beach, among other American cities.

The Boston Post detailed apple bobbing in the "vicinity of the orchards" and "parties of all descriptions through the city" in a news article on October 31, 1918.

"Goblins and merrymakers will reign tonight throughout Philadelphia – for this is Halloween," reported the Evening Public Ledger on October 31, 1918. The newspaper did also note that "In hundreds of homes where the influenza caused sickness or death, there will be no observance of the occasion."

The Long Beach Daily Telegram included an advertisement on October 31, 1918, that highlighted the "Halloween Party and Carnival Night at the Tower Café [in] Seal Beach."

Times were different, yet similar to today's. Hallowe'en in 1918 did not just take place during the Pandemic of 1918-1919. It also took place during what we now call "World War I." The Evening Current in Carlsbad, New Mexico, reported on October 31, 1918, that people were encouraged to eat or can the meat they carved out of pumpkins and they were asked to save nutshells and fruit pits for use as carbon in gas masks for the war efforts. This was a time when the United States had real enemies fighting all Americans – regardless of race, ethnicity, religion, or any other human construct we Americans might use to highlight our differences rather than what binds us together. (Our true enemies typically consider all of us – regardless of race, ethnicity, religion, or any other human construct – to be their adversaries.)

Many look upon today as the worst time in our nation's history. That we – as a country – have never faced such troubles.

Rest assured that Americans faced much worse times in the past. We do not, today, have Americans being gassed on the western front in Europe. We have not, yet, lost so many people to an unseen virus that would result in life expectancy being lowered by twelve years because of the pandemic.

We can learn much from how people handled gatherings like Halloween in years past. Not everyone agreed on what to do. Not everyone followed the rules.

But in 1918, many people did the best they could given the circumstances. We can learn from those individuals.

"I would like to encourage you to have a safe Halloween. When considering what you would like to do this Halloween, in the mist of the pandemic, it is important to follow the CDC [Centers for Disease Control and Prevention] and the Governor's [Michelle Lynn Lujan Grisham] guidelines for safety.

Avoid 'Trunk or Treat' events from trunks of cars.

Avoid hayrides or tractor rides with people from outside your household.

Avoid traveling to another community for Halloween events.

So, with all of these things to 'Avoid,' what can you and your family do to still enjoy Halloween while staying safe? The following are some suggestions by the CDC and the Governor:

Do a Halloween scavenger hunt with your household members in and around the immediate vicinity of your home.

Carve and decorate pumpkins with members of your household.

Have a Halloween movie night with household members.

Have a virtual Halloween costume contest with family and friends.

The number of Covid-19 cases and hospitalizations are spiking once again in New Mexico, and specifically Grant County, so it is really important to avoid all high-risk activities. Furthermore, it is also really important to follow safe practices by wearing a face mask, social distancing of six feet when in the public, washing your hands frequently, and avoiding groups of larger than five people.

This is Silver City Mayor saying Thank You and God Bless." 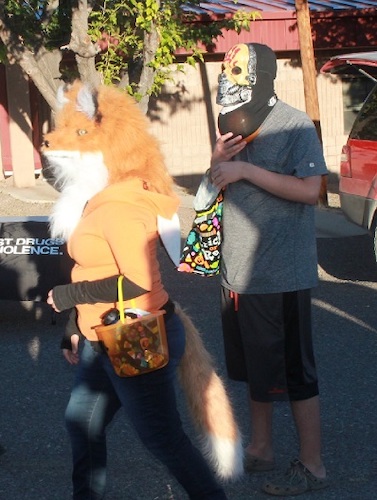 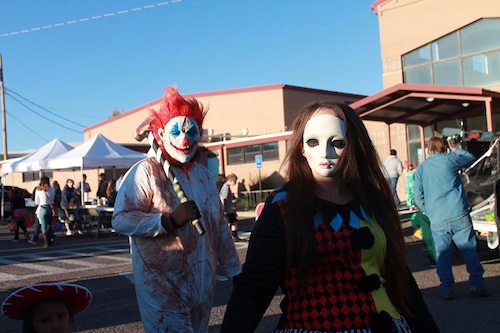 Several "visitors" – including a two-legged fox and a "gentleman" with a unique hair style – came to the Gila National Forest for last year's Halloween event. (The photographs were provided courtesy of the U S Forest Service through Facebook, October 28, 2019.) 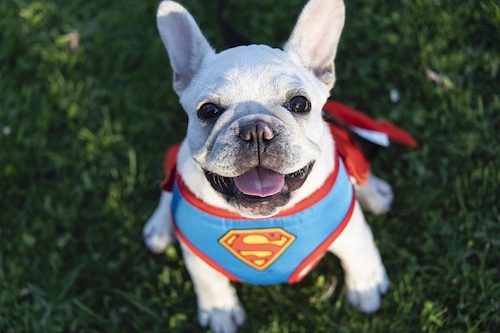 In happier times, one of the participants in the Howl-O-Ween Spooktacular pet show coordinated by the Parks at Monterey Bay (in California) on October 19, 2018. (The photograph was produced by Joseph Kumzak and provided courtesy of the Presidio of Monterey Office of Public Affairs through Flickr, October 19, 2018.)