The Chronicles of Grant County
24 November 2020 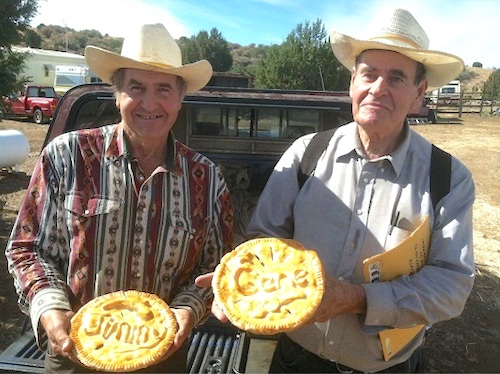 Thanksgiving in happier times in Grant County. Jimmie and Gene Booth (left to right) are seen here in Arenas Valley with namesake apple pies in 2012. Both are doing well this Thanksgiving. (The photograph was provided courtesy of Manda Clair Jost, November 22, 2012.)

Thanksgiving in Silver City and Grant County this year will be different from most other Thanksgiving celebrations that have been held in New Mexico in years past. But there was at least one year – during the Pandemic of 1918-1919 – when many in New Mexico and throughout the United States determined that Thanksgiving should be celebrated in private ways, among only close family members.

Consider events during the Fall of 1918. The second wave of the Pandemic of 1918-1919 was hitting the country. New Mexico, Colorado, and other states were trying to fight an unseen enemy.

A news article in the Albuquerque Morning Journal on December 1, 1918, stated "For the first time in years there were no public gatherings in Albuquerque on Thanksgiving day. And while many people of course enjoyed the usual turkey dinner, there were no 'affairs' in the city on the day which was set aside by presidential proclamation for the giving of thanks."

Ten days earlier, on November 23, 1918, the Albuquerque Morning Journal published a report on the dire situation in Denver, Colorado. A few sentences from that report dated November 22, 1918: "Sweeping and drastic orders aimed to check a second outbreak of the influenza epidemic in Denver, were framed today by the city's advisory medical board...The new regulations check absolutely and completely any public gatherings and make the wearing of gauze masks compulsory in the streets of the city...the medical board adopted the old saving that 'three's a crowd,' and will prohibit the gathering of more than two persons on sidewalks or in parks. All special affairs are to be cancelled, families planning Thanksgiving dinners are asked to withdraw invitations to all who are not members of the family circle."

To put the situation in perspective, Denver had previously implemented closing orders due to the Pandemic of 1918-1919, but lifted them on November 11, 1918. Between that date and November 22, 1918, the newspaper reported that there had been 1,703 new cases of influenza and 109 deaths from influenza in Denver.

The U S Centers for Disease Control and Prevention (CDC) has issued recommendations for Americans to follow for Thanksgiving of 2020. You can view those recommendations by clicking here.

Among the recommendations from the CDC are "Celebrating virtually or with the people you live with is the safest choice this Thanksgiving." Having a small outdoor meal is one option suggested by the CDC.

The photographs below show how some of the local critters joined with the Cozens Family in a celebration of Thanksgiving during 2019 and during 2020. The first two photos are from 2019, while the other two photos are from 2020. All were taken by Mr. Bert Cozens at Pinery Provincial Park on Lake Huron in Ontario. The critters did not provide their names for edification.

May the joy of life be something we all can celebrate this Thanksgiving in Grant County.