The Chronicles of Grant County
16 December 2020 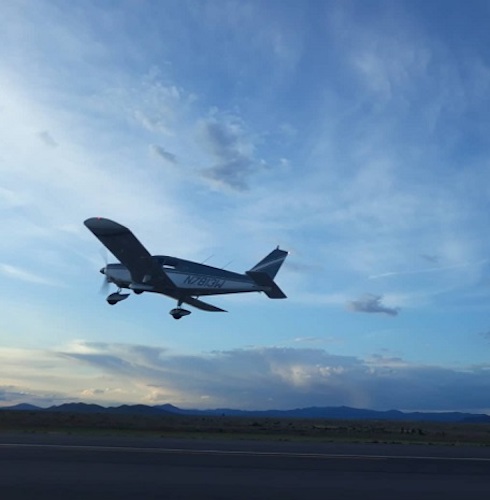 A plane is flown by Benjamin Coffey from the Grant County Airport. (The photograph was provided courtesy of Mr. Coffey through Instagram, August 10, 2019.)

Residents and visitors to communities in Grant County – as well as nearby counties – have access to air transport through the Grant County Airport. Located south of the Town of Hurley, this Airport includes a variety of services for both general aviation and commercial scheduled air service as well as for other governmental services to protect lands throughout the Southwest.

This Airport is operated today by Grant County. It opened to the traveling public at the current site in December of 1951. At different times in its history, the Airport's name was the "Silver City - Grant County Airport." A tornado hit the Airport, according to several news reports, on October 12, 1957.

The County states that the mission of the Grant County Airport is "to provide a modern, safe, all-weather airport, enabling our community to take advantage of aviation services such as airline travel, emergency travel or services, easy access into and out of Grant County, as well as many other services, which enhance the quality of life in Grant County."

"We just completed a renovation of the commercial service terminal," explained Rebekah Wenger, Manager of the Grant County Airport, "and have just started work on our apron and taxiway."

Through assistance from funding from the U S Department of Transportation (US DOT), scheduled commercial air transport services are available at the Grant County Airport.

"The Airline Deregulation Act (ADA), passed in 1978, gave air carriers almost total freedom to determine which markets to serve domestically and what fares to charge for that service," according to a statement from the U S DOT. "The Essential Air Service (EAS) program was put into place to guarantee that small communities that were served by certificated air carriers before airline deregulation maintain a minimal level of scheduled air service. The [U S DOT]…is mandated to provide eligible EAS communities with access to the National Air Transportation System."

The communities of Silver City, Hurley, and Deming are collectively considered by the U S DOT to be among those EAS communities.

A report from the U S DOT shows that Federal tax dollars in the amount of $3,513,367 were used to subsidize air service through Advanced Airlines during 2019; a similar amount was provided by Federal taxpayers in 2020. The funds were designated by the U S DOT to provide 24 weekly round-trips from Grant County on 9-seat King Air planes.

The US DOT is in the process of drafting a new contract to continue essential air service to Grant County in 2021 and beyond.

In addition to the scheduled commercial flights to and from this Airport, general aviation is a key aspect of airport operations. This includes individuals and businesses that operate their own private airplanes at the site.

"The Grant County Airport is a very convenient and safe airport to operate out of," noted Benjamin Coffey, Vice President of the Grant County Pilots Association. "I did my training for my private pilot's license there. It has a nice long paved runway and multiple dirt runways! Without the Grant County Field, general aviation would almost not be accessible to the residents of Silver City and the surrounding area. It provides fuel and hangars to the residents of Grant County. It also makes a great fuel stop for transient plots just flying through the area. It is a wonderful airport to call home."

There is a third aspect to the operations found at this Airport – the protection of national forest lands, national park properties, and other ground through the U S Forest Service. The County notes that the "Grant County Airport is also home to the Gila National Forest Aerial Fire Base and Fire Cache. Forest Fire fighting support is provided throughout the Southwestern United States from this base." News reports indicated that this fire base started operations at the Grant County Airport possibly as early as 1954; the firefighting operations were formally located in Deming.

Additional information on aviation in Grant County will be the subject of a future edition of The Chronicles Of Grant County. 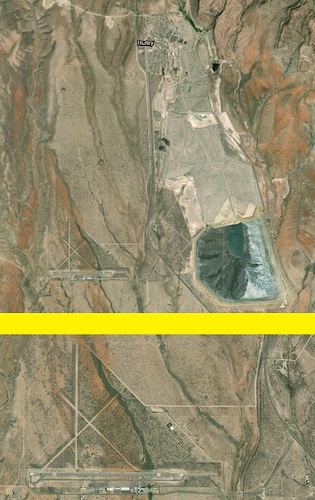 These two aerial images – separated by the yellow stripe – show the location of the Grant County Airport. The top photograph shows the Airport (in lower left-hand corner of the top image) in relationship to the nearest community, the Town of Hurley (in the center of the top of this photo), while a close-up of the airport runways is seen in the bottom photo. (The aerial photographs were provided courtesy of the United States Geological Survey.)