The Chronicles of Grant County
06 January 2021 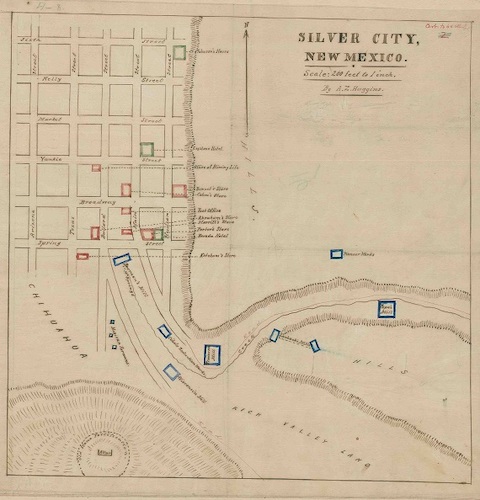 This image shows the initial street grid for the Town of Silver City. (The image of the General Land Office of the Bureau of Land Management of the U S Department of Interior was provided through the courtesy of The National Archives and Records Administration.)

With one major exception, as you travel around downtown Silver City, you'll be on streets that carry the same names as the ones laid out in the initial plans for the Town. That one major exception is the result of the impact of water on the development of Silver City. The Town Site survey did not take into account the geography of the area. That's one likely reason that key segments of Main Street planned in the 1870s have long ceased being a roadway. These road segments were destroyed in floods and are now part of the Big Ditch Park.

The initial plan for the Town of Silver City was based on a grid pattern.

"Broadway", "Main," and "Market" as well as numbered streets are names typically used in many American cities, with "broadway" meaning a "broad – wide – roadway"; "main" meaning a "major avenue"; and "market" meaning a "place of commerce." Sixth Street got its name because it was the sixth street heading north from the first street – Spring Street – in the Town Site Survey.

Spring Street, itself, likely received its name because of the spring that was in the area of La Ciénaga de San Vicente, the name given to the Silver City area by explorers of European heritage.

Three of the other streets were named after prominent people who helped develop the Town of Silver City: "In 1870…Captain [John] Bullard laid out the streets of the Silver City…," according to information from the Silver City Grant County Chamber of Commerce & Conference Center. Reports indicated that John and his brother, James Bullard, owned a farm just east of the Chloride Flat and owned mining interests in the area. James Bullard and Joseph Yankie were among the initial settlers (of European heritage), according to a news article dated January 30, 1877, in the Weekly New Mexican out of Santa Fe; the newspaper was quoting information from "Mr. O. L. Scott, editor…of 'Mining Life.'" Richard Hudson was the Probate Judge of Grant County, according to a news article dated January 13, 1871, in The Daily New Mexican. The specific source for the name of Kelly Street is not certain.

Further information on the names of several of these streets as well as some of the buildings and businesses that existed at the time of the initial survey will be detailed in future editions of The Chronicles Of Grant County. 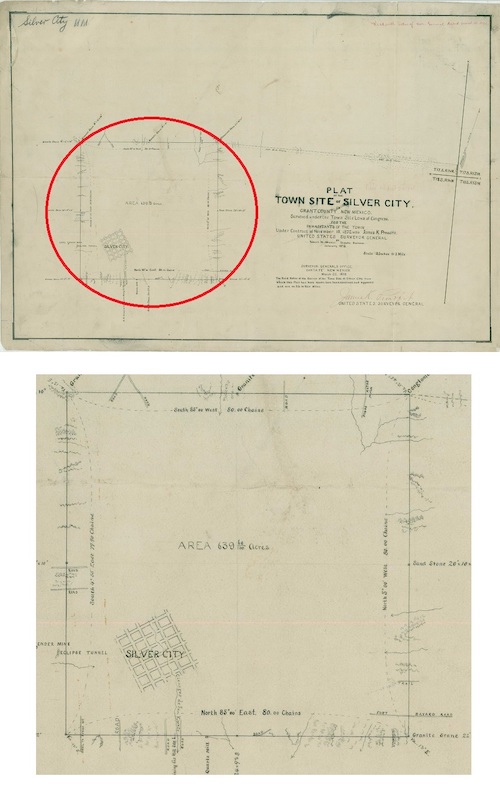 The top image shows the overall site for the Town of Silver City in Grant County. The portion of the top image in the red circle is displayed in the bottom image. The plat plan includes almost one square mile (just less than 640 acres according to the plat). (The main image of the General Land Office of the Bureau of Land Management of the U S Department of Interior was provided through the courtesy of The National Archives and Records Administration, March 22, 1873.)
Do you have questions about communities in Grant County?