The Chronicles of Grant County
20 January 2021 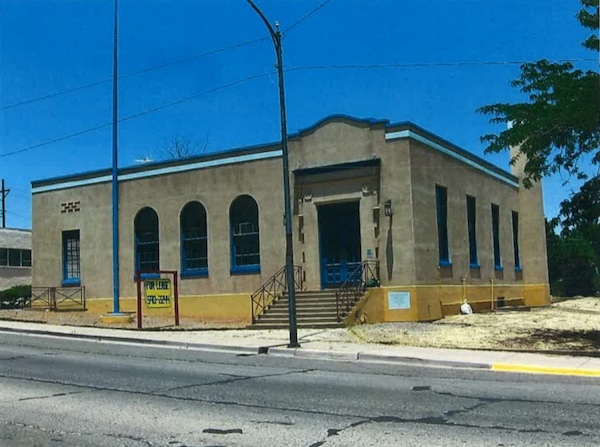 The United States Post Office operated from this building on Broadway Street from 1935 through 1976. (The photograph was provided through the National Park Service, 2012.)

Year 2021 is the 150th year of the post office operating in Silver City. The initial site of the United States Post Office serving the Town was located at the corner of Main Street and Broadway Street. It began operations in 1871.

The local post office moved from that location at some point. A 1902 map from the Sanborn Fire Insurance Company showed the post office building noted in the map from the 1870s to be vacant; Main Street in this area was listed as being "badly gullied by freshets" in 1902. A map in 1908 showed the location of that same building to be part of the gulch that is today's Big Ditch Park; the building noted in the earlier maps no longer stood.

That 1908 map from the Sanborn Fire Insurance Company indicated that the post office was at that time located on Bullard Street, between Yankie and Market Streets.

In 1917, a map from this fire insurance company detailed that the Post Office was now located in an Adobe building on Market Street at its intersection with Bullard Street; there was an additional "Post Office Rm" next to the Adobe structure. In 1883 and in 1886, the site of the Adobe building was listed on maps from this fire insurance company as the "Variety Theater." Maps from both 1893 and 1898 indicated that it was the structure known as the "Gem Variety Theater," but was vacant at the time of the publication of both of these maps. In 1902, a map from the Sanborn Fire Insurance Company no longer listed the building as a theater, but just listed it as a vacant structure. A map from this fire insurance company detailed that the building was now occupied by a "Saddle and Harness" manufacturer in 1908.

Efforts to build a new structure for a post office in Silver City were announced in 1934. The site chosen was at 412 West Broadway Street. (Please note that an address of "400 West Broadway" was also used to designate this building at the intersection of Broadway and Pinos Altos Streets.)

"The Silver City Post Office was constructed in 1935 from plans by the [U S] Treasury Department, with Louis Simon serving as superintendent of Architecture at the time," according to the National Register of Historic Places Registration Form filed with the National Park Service by the New Mexico Historic Preservation Office on August 17, 2012. "Robert McKee of El Paso was the contractor. The one-story building is hollow tile construction covered with a stucco finish. Three large arched windows and a double-leaf door with lights distinguish the facade. Transoms with decorative spindles crown the doors, and a Mission arch with bas-relief ornamentation and an entablature with finials further embellish the entrance. Numerous nine-over-nine wood framed windows resting on projecting sills illuminate the interior. The building sits on a raised basement."

For more than forty years, the post office building constructed during the Great Depression served the Town of Silver City and surrounding areas. In April of 1975, designs for a new post office to serve the region were publicly announced by Federal officials. The U S Post Office in Silver City moved to a new location at 500 North Hudson Street – its current location – in 1976.

This site for postal operations has an unusual history itself. It was previously the location of three houses that served as the core of the Red Light District in Silver City. Mildred Clark Cusey, known to many locally as "Madam Millie," operated her houses of prostitution here. Reports in a number of newspapers indicated that Mrs. Cusey was well-known in Grant County and beyond for her business activities. Those same news reports also noted that she was very charitable to people in need in the region. The houses of prostitution were closed, according to those news reports, in 1968.

Furniture and furnishings from the brothels were sold through the years. On August 4, 1978, a classified ad in the Albuquerque Journal highlighted a "Millie Sale" of "Contents of Hudson Street Brothels in Silver City"; that sale took place in Bayard, according to the advertisement. Other classified ads detailing the sale of goods from the brothels were published in the same newspaper that year as well years later in June of 1991.

The initial location of the United States Post Office in Silver City was located at the corner of Main Street and Broadway Street; the blue circle shows the site on this map. (The above image is part of a larger image of the General Land Office of the Bureau of Land Management of the U S Department of Interior was provided through the courtesy of The National Archives and Records Administration.)