A Phrase And Death

The Chronicles of Grant County
10 March 2021 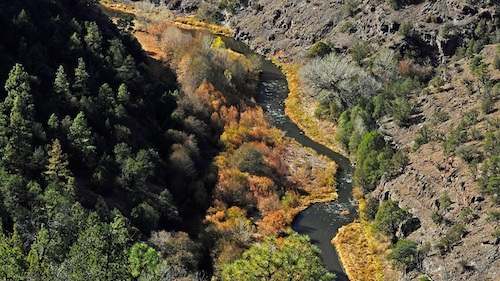 This photograph shows the Gila River as it flows through the Gila Wilderness. The Apache Nation once included lands throughout Grant County as well as other areas of what is today the Southwest of the United States as well as northern Mexico. (This photo was provided through Flickr courtesy of Steve Douglas, November 18, 2012.)

When describing people from a different culture, individuals sometimes use words that seem innocuous or pleasant to themselves. Yet those same words may be used purposely to bring pain to others and may be considered offensive to the individuals from that different culture.

"Happy hunting ground" is one such phrase.

When Spaniards, other Europeans, and Mexicans came through what is now Silver City and Grant County, they found that other people already lived in the area. This section of America's Southwest was once part of the homelands of the Apache Nation.

Wording used by these new settlers indicated that when an Apache died, he or she was sent to the "happy hunting ground." In many cases, the wording was used in derogatory fashions, though some people used the phrase in ways that were likely seen by contemporaries as complementary. Many news articles used the wording as shorthand to indicate that Apaches or other Native Americans were killed or had died.

On March 14, 1871, a news article in the Weekly New Mexican reported that "In the latter part of the year 1869, Capt. Bullard [Captain John Bullard, one of the founders of Silver City], in obedience to a call or authority from the Governor of New Mexico, organized a 'posse' of citizens for the purpose of pursuing and punishing marauding and murdering bands of Indians, that were continually harrassing the settlements. [Captain Bullard was killed during one of these pursuits in 1871.]…It will be remembered too that Major Kelly, 3rd Cavalry, stationed at Fort Bayard, had only a short time ago returned from a successful pursuit of marauding Indians. He reported and brought back proof of fourteen Indians killed in his fight. Mr. James Bullard [brother of John and also one of the founders of Silver City] was with him and sent more than one Apache to the 'happy hunting grounds.'"

The Albuquerque Morning Journal on October 27, 1882, included a news article detailing life in an American town in the Southwest "…which not many years ago was but a barren plain, held by that wild and savage race, the Apaches. No longer are the voices of the savage race heard; they have moved or rather left, and many have gone to that happy hunting ground."

A headline in the Deming Graphic on February 19, 1909, noted that "Geronimo Is Dead – Famous Indian Chief Goes to the Happy Hunting Ground." According to the National Park Service, Geronimo was "…a medicine man of the Bedonkehe band of the Chiricahua Apache" and that his birth name was "Goyakla." In his autobiography, though, Geronimo stated that his birth name was "Go khlä yeh."

The phrase "happy hunting ground" is considered offensive to the Apache Nation.

"Presuming that 'happy hunting ground' is to be a native equivalent to the Christian concept of heaven, after missionaries began their work, our tribe would occasionally use a term that would translate as 'the good place,'" explained Mr. Darrow. "The term 'happy hunting ground' in English would only be used by our tribal members in a manner mildly mocking non-native use of the term as culturally applicable in situations involving natives. Describing native concepts of what the afterlife would be like by calling it the 'happy hunting ground' is derisive and belittling of native concepts along the lines of describing Christian concepts of heaven as 'clouds with flying babies.' The cultural concepts of what is seen to be of value is revealed by descriptions of golden mansions and streets of gold and golden slippers and pearly gates. Natives tended to place value not on money or treasure but rather on health and well-being and accessibility of natural resources."

Death is viewed differently in many cultures.

For the Apache, "When a person dies, their body is left behind but the person continues on," stated Mr. Darrow. "To allow them to go on, any possessions that are closely associated with them are destroyed, and their name is not uttered so they will not be called back."

"It is not considered appropriate to speak of death directly," noted Mr. Darrow. "Euphemisms are used. My aunt mentioned one which says, 'his/her footprints have disappeared.' That particular term is still used on rare occasions only among our tribal members who remain familiar with the term. It is perceived as thoughtful and respectful by those who are familiar with it."

When reading news content that was produced years ago, like the news articles that included the phrase "happy hunting ground," Mr. Darrow recommended that such "news content with offensive language produced years ago should be viewed with realization and understanding of the situation prevailing at the time and should not be thoughtlessly repeated unquestioningly in updated information."

Mr. Darrow explained that he "cannot speak for the other Apache Nations – Jicarilla Apache, Mescalero Apache, etc. – but I suspect they may have similar views."