The Chronicles of Grant County
28 April 2021 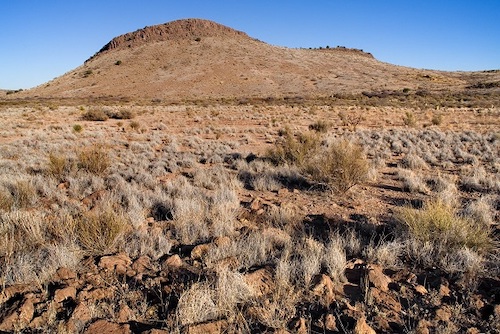 A view of the Eastern Foothills of the Pyramid Mountains in Hidalgo County. (The photograph was provided by Patrick Alexander through Flickr, January 9, 2013.)

Grant County used to have a border Mexico. That is before this county lost the southwest portion of its territory.

Have you ever heard of Pyramid County?

How about Steeple Rock County?

How about Leahy County?

That's not a surprise. These names were among the names considered for the county that is now known as "Hidalgo County." According to the government of Hidalgo County, this county "…was named in honor of Miguel Dolores Hidalgo, who led the revolution in Mexico in 1810, which eventually led to its independence from Spain."

There is a Mexican state with the name of "Hidalgo" as well as a community in the Federal District of Mexico with the name of "Miguel Hidalgo." The local governmental entity in Mexico indicated that Miguel Hidalgo "…is one of the 16 territorial demarcations of Mexico City…[and was named in] recognition of Miguel Hidalgo y Costilla, priest and soldier who participated in the first stage of the Mexican War of Independence and who is also known as 'Father of the Nation.'"

Efforts to create a new county out of the western and southern portions of Grant County had been underway for decades. One of the first mentions of efforts to create a new county to be formed from the southwestern portion of Grant County was in the Western Liberal dated January 20, 1893. The newspaper indicated it supported the created of Pyramid County.

Much of the support for the idea of splitting Grant County revolved around the distance for residents to travel to the county seat from the smaller towns throughout the enlarged Grant County. "Owing to the great distances that have to be traveled a great proportion of the taxes of Grant county is expanded in traveling fees for officers, jurors and prisoners," reported the Western Liberal in a news article dated December 4, 1896. The same news article confirmed that "The favorite name of the new county is Steeple Rock."

The Albuquerque Morning Journal reported on November 27, 1904, in a news article from a newspaper in Lordsburg that "Now is the time for the people in this section of Grant county to go to work for county division..." On February 24, 1905, the Western Liberal indicated that efforts were underway "...for the establishment of the county of Pyramid, with Lordsburg as its county seat."

The headline of "Pyramid County Comes To Life" was in the edition of the Albuquerque Morning Journal on January 9, 1912. The subheadline indicated that "Agitation Renewed For Division of Grant County; Lordsburg Proposed as County Seat." A little more than four months later, on May 15, 1912, the same newspaper included a news article with the headline of "Proposed Division of Grant County Falls Through"; a subheadline stated that "Meeting Held at Silver City, at Which Lordsburg Citizens Were Present, Fails to Reach Agreement."

Efforts began again when "...a bill providing for the division of Grant county to create the new county of 'Pyramid' was introduced [in the New Mexico Legislature]..." according to a news article dated February 28, 1917, in the Santa Fe New Mexican. "County Division Is Nearing Realization Before State Senate Now: Workers In Santa Fe For Division of Grant County" was the headline at the top of the Western Liberal on March 2, 1917.

Later that year, the Western Liberal included an advertisement-type news item on December 21, 1917, stating that "Southern Grant County has been promised by Political Leaders a division of the county at the next legislature. Something may prevent it but it is doubtful. County division has been coming for a number of years and is about arrived. When the county is divided Lordsburg will be the county seat. The new county will likely be known as 'Pyramid County.'"

"The creation of Pyramid county by taking a slice off of Grant county has been agreed to," reported the Albuquerque Morning Journal in a news article on February 12, 1919. "The name of Pyramid was chosen because of the Pyramid mountains, visible from Lordsburg, which will be the county seat. The new county will have eight million dollars of assessable property."

The current name came about sometime in mid to late February of 1919. The Deming Headlight reported in a news article dated February 25, 1919, that "It's Hidalgo County Now. Name of 'Pyramid' Discarded for Biggest and Latest 'New Mexico Baby.'" Three days later, on February 28, 1919, the same newspaper provided further details that at the time of the legislative approval for the new county, an amendment was approved to use the name "Hidalgo" rather than "Pyramid County." At the same time, there was an aborted effort to name the new county 'Leahy County,' in honor of Mr. (no first name provided) Leahy, "...in honor of the chief booster for the division of Grant County."

The Columbus Courier reported on March 14, 1919, that the Governor of New Mexico "...signed the bill creating a new county christened Hidalgo county, out of the southern half of Grant county." The Deming Headlight reported on January 2, 1920, that "Hidalgo, the county created from Grant at the last session of the state legislature, came into existence with the first clang of the midnight hour [on January 1, 1920]." 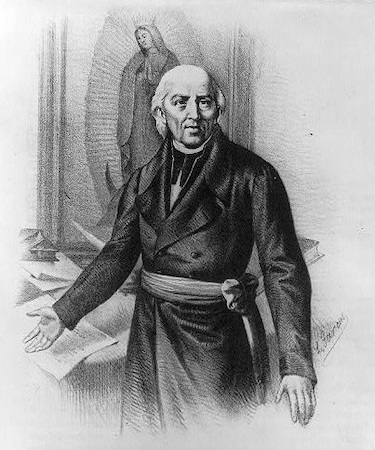 Miguel Hidalgo y Costilla. (Image was provided courtesy of the Library of Congress, image created circa 1873.)