The red circle highlights the route of the El Paso And Southwestern Railway in what was southern Grant County in 1910. The lands that compose Hidalgo County today had not yet been separated from Grant County. (The image was published in Transactions Paper No. 1170 – The Water Supply of the El Paso and Southwestern Railway from Carrizozo to Santa Rosa, N. Mex. and was provided courtesy of the American Society of Civil Engineers, 1910.)

When Hidalgo County was created from the territory of Grant County in 1920, leaders of Grant County negotiated the borders of the new county so that Grant County retained a portion of its existing southern territory. It was deemed critical by local leaders that Hachita remain within Grant County. That small community included the links between the main railroad serving Silver City and the railroad connecting Tucson and El Paso.

Rail transportation was important to Grant County because it was via rail that copper, silver, lead, and other products were shipped from the mines of Grant County. Mining then – and today – was a key industry in southwestern New Mexico. Leaders determined that without direct access to the key rail lines in the region, Grant County would be placed in a difficult economic situation.

"Hachita is also a railroad center, for this is the junction of the main line of the E. P. & S. W. [El Paso and Southwestern Railway] and the branch railway to Lordsburg and Clifton, Ariz.," reported the El Paso Herald on June 8, 1912. "It is the end of the division and the principal coaling station of the railroads, and many of the railroad employees make Hachita their home and headquarters, so as to send their children to school."

On the eve of its birth, Hidalgo County saw a significant part of its wealth in the railroads that crossed the territory that had been Grant County. According to a news article dated December 21, 1919, in the El Paso Morning Times, "The principal items of taxable wealth which go to make up the grand total of value mentioned [$16,000,000 as determined by the New Mexico state tax commission] are its three railroads the Southern Pacific, El Paso and Southwestern, and the Arizona and New Mexico, mines of copper, silver, gold and lead and livestock consisting principally of cattle, but with large herds of sheep and Angora goats."

Thus, when you look at a map and wonder why Grant County extends almost to the international border with Mexico, you realize that the territory retained by Grant County when Hidalgo County was created was not focused on simply retaining land. It was based on economic necessities of the time when rail transport was critical to employment and wealth in the area. 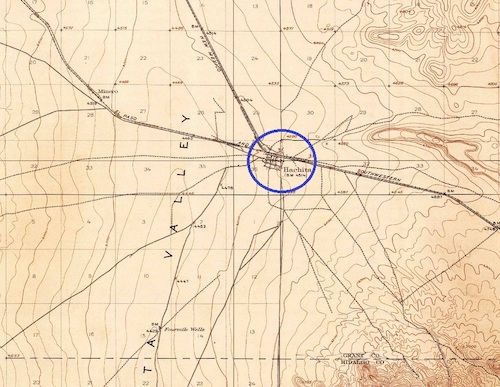 It was deemed critical by Grant County leaders to retain a portion of southern Grant County as the new County of Hidalgo was created. This map shows that this territory included Hachita. This small town (in the blue circle on the map) included a link between the railroads connecting Silver City to El Paso and Tucson. (Map was produced in 1918 and provided courtesy of the United States Geological Survey, 1942 ed.)