Mexican wolf pups may look so sweet as they nuzzle each other in the photograph above. Yet, it would be unwise – extremely unwise – to consider these wild animals to be pets. Resist any urge you might have to pick one up and hold.

This is especially true since a momma Mexican wolf will likely be somewhere nearby. She is unlikely to welcome your attention to her little ones.

For more than twenty years, since 1998, the United States Fish and Wildlife Service (USFWS) has been re-introducing Mexican wolves to areas of Arizona and New Mexico. The lands of Grant County are included in two zones utilized by the USFWS to manage the Mexican Wolves in the region: Wolf Management Zone 1 and Wolf Management Zone 2. Note in the map displayed below that Management Zone 1 is in two separate pieces within Grant County. In between the two sections are houses and other privately-owned properties.

To state the obvious, Mexican wolves do not recognize the borders of the Gila National Forest or property lines between houses and grazing areas for cattle. The impact of the wolves has been a serious concern for area ranchers, among others.

Last week, in a letter dated May 13, 2021, more than 100 scientists asked the U S Fish and Wildlife Service to restore the protections previously accorded to the gray wolves by "…reinstating federal protections [through the Endangered Species Act] for gray wolves across the contiguous United States."

Mexican wolves were a common sight in Grant County in years past. As settlements were established and as livestock was raised in the area, the Mexican wolves became a major problem in the Southwest.

The Santa Fe New Mexican on September 17, 1918, reprinted a news article from the Tucson Citizen that stated that "...the gray Mexican wolf does great damage to cattle herds...The Mexican wolf is the most costly of the predatory animals. They come across the line [the international border with Mexico] in considerable numbers. As no measures for the control of the predatory are taken in Mexico, the mountains south of the line make safe breeding places for them."

The impacts caused by wolves 100 years have come back to the area because of the re-introduction of the animal by the Federal Government.

"Historically, the core range of Mexican wolves occurred throughout mountainous regions from central Mexico, through southeastern Arizona, southern New Mexico, and southwestern Texas," according to a statement from the USFWS. "More recent information obtained from examining historical wolf specimens however, suggests that Mexican wolves may have roamed farther north. The Mexican wolf was common throughout its core range through the mid-1800s. Towards the turn of the century, however, high cattle stocking rates and declining populations of native prey, such as deer and elk, caused many wolves to prey on livestock. This led to intensive efforts to eradicate Mexican wolves in the southwestern United States. By the mid-1900s, Mexican wolves had been effectively eliminated from the United States, and populations in Mexico were severely reduced. Following the passage of the Endangered Species Act in 1973, Mexican wolves were listed by the U S Fish and Wildlife Service as an endangered species in 1976, thereby prompting recovery efforts to save the species from extinction."

There were 114 Mexican wolves in New Mexico and 72 Mexican wolves in Arizona, according to a news statement issued by the USFWS on March 12, 2021:
"From November 2020 through January 2021, the Interagency Field Team (IFT) conducted ground counts in Arizona and New Mexico that concluded with aerial counts of Mexican wolves in January and February…[there] was a 24% increase from 2018. This population has nearly doubled in size over the last five years."

That growth in the wolf population has had serious consequences on ranchers in the Southwest. In the next edition of The Chronicles Of Grant County, you'll be able to see the results of investigations of what wolves have done to cattle and other livestock in the region. 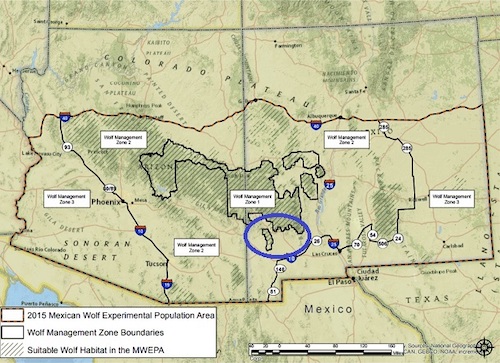