Fort Bayard National Cemetery (This photograph was provided courtesy of the U S Department of Veterans Affairs.)

Grant County is the final site of rest for thousands of people at the Fort Bayard National Cemetery. There will be no public ceremonies for Memorial Day at this cemetery this year. That doesn't mean the day will go without notice.

"The Department of Veterans Affairs Santa Fe/Bayard National Cemetery will host a solemn Memorial Day wreath laying ceremony," according to a statement issued by the Federal Government. The wreath laying will be "accompanied by brief remarks, a moment of silence, the playing of Taps, and a rifle volley… This will not be a public ceremony."

Memorial Day is the day set aside to remember the men and women who have died while serving our country as members of the military of the United States of America. The holiday was initially known as "Decoration Day" in many parts of the country. On this day, in the years prior to the pandemic, ceremonies were common sites at cemeteries throughout the country.

It's important to remember both groups of people.

One of the people who rests at Fort Bayard National Cemetery is someone to remember today: Thomas Foy. 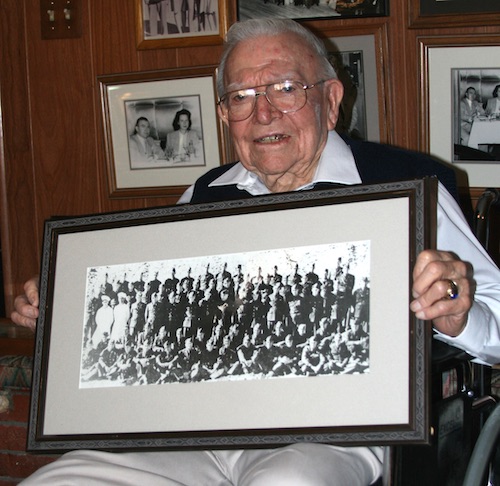 Thomas P. Foy, with photo of 200th Coast Artillery (Photo Courtesy of Mary Alice Murphy from "God's Umbrella: Southwest New Mexico World War II Survivors")
According to U S Department of Veterans Affairs, "New Mexico native Thomas P. Foy (1914-2011) graduated from the University of Notre Dame (Indiana) in the late 1930s and began to practice law. He enlisted in the National Guard in 1941 and went to the Philippine Islands. First Lieutenant Foy was in the Pacific that December when the Japanese attack on Pearl Harbor brought the United States into World War II. He was captured in April 1942, as part of the 200th Coat Artillery, and was among the more than 70,000 Filipino and U S troops marched 60 miles across the Bataan Peninsula. Lt. Foy survived 44 months in a POW camp before being rescued; he received the Purple Heart, Bronze Star, and other commendations for his service. As a civilian, Mr. Foy married and returned to his legal career. He was elected as county district attorney in 1949-1956 and to the state legislature in 1970-1998. Mr. Foy died October 8, 2011, and is buried in Section F, Row R, Site 15."

The march referenced – the Bataan Death March – was one of the touchstones of World War II.

It may sound innocuous to describe that event as a "march." It wasn't simply a bunch of men walking down a road. No, it was a terror-filled time where Japanese military personnel would randomly torture and kill Americans and Filipinos.

"The 200th and 515th Coast Artilleries, stationed in the Philippines were made up of many New Mexico National Guardsmen," according to a news piece dated April 2, 2009, from Staff Sgt. Anna Doo of the New Mexico National Guard. "After three months of fighting the Japanese with insufficient weapons and dwindling supplies, the American and Filipino soldiers were ordered to surrender. The Japanese forced the soldiers to march over 60 miles with nearly no food or water. The prisoners were subjected to heinous acts of torture and many were killed or perished while marching. Some of the soldiers who survived the march spent the next three years in Japanese prisoner of war camps until freed in 1945."

Thomas Foy was one of those men.

Take a moment today to reflect on the sacrifices of the men and women who died in service to our nation. Recall the sacrifices made by their families and loved ones.

Remember Mr. Foy and all of the others who call the Fort Bayard National Cemetery their final resting place.

A future news column will highlight further aspects of the connections of New Mexico and Bataan in the Philippines. 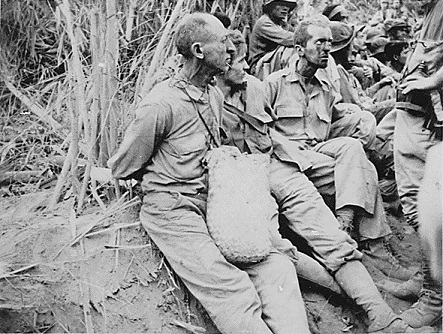 Thomas Foy (not pictured) was one of the Americans taken prisoner by the Japanese and forced in the Bataan March of Death in the Philippines. The caption for this photograph indicated that prisoners "…have their hands tied behind their backs. The March of Death was…from Bataan to Cabanatuan, the prison camp." (Photograph was provided courtesy of the United States Marine Corps through The U S National Archives and Records Administration, circa May of 1942.)