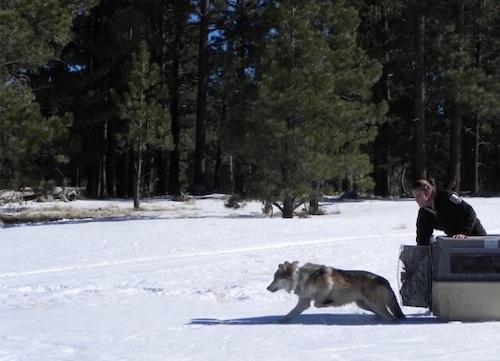 Translocation of Mexican wolf M1049 to the wild in Catron County, New Mexico. (Photograph was provided courtesy of the United States Fish and Wildlife Service, 2011.)

Local folks may reasonably wonder why would you purposely place predatory wild animals in an area inhabited by human beings.

Views on this issue differ based on philosophy. Those philosophies have been enshrined in laws and regulations. As years have gone by, those standards have changed.

There was a time where local folks – with the support and active participation by governmental authorities – hunted Mexican wolves with the intent to eliminate that species from the landscape. In large measure, that was achieved in Grant County and nearby jurisdictions in both New Mexico and Arizona. The goal to remove the Mexican wolves from the region was rooted in the view that the frontier was to be made hospitable to humans and our ways of life.

In the early days of settlers from outside the region coming into what is now Grant County, those new folks wanted to create an environment that they considered safe for themselves. The rights of those who were here before – whether they be fellow humans like the Apache or wild animals like the Mexican wolves – were immaterial to large portions of the new population.

The Apache fought against the new settlers. For years. The Apache lost. The Apache were either killed or removed from the area. Many were "relocated" – governmental-speak for forcibly taken by the military – to prisons and eventually to reservations outside of Grant County.

Wolves were treated in similar manners, but the goal was not removal. It was extermination. As predator animals, wolves kill other animals. The new settlers utilized a variety of animals in their everyday lives. Horses for travel as well as for work. Livestock to produce food and income for the families. Wolves were a direct threat to the ways of life being put in place by these new residents.

As such, local folks – with eventual support of governmental entities far beyond New Mexico – killed as many wolves as possible. Governmental rules and laws were designed based on eliminating the Mexican wolves as a matter of policy.

"By the mid-1900s, Mexican wolves had been effectively eliminated from the United States, and populations in Mexico were severely reduced," according to the U S Fish and Wildlife Service.

The Endangered Species Act was passed by the U S Congress in 1973. Three years later, in 1976, the U S Fish and Wildlife Service listed the Mexican wolf as an endangered species. Governmental policies had thus changed from one in the early days of the 20th century where total removal of the Mexican wolves was considered critical to one where recovery efforts were implemented to save the species from extinction.

To a large extent, the concept of co-existence is now the goal of Federal officials as well as a number of others in environmental organizations.

With those changes in policies have come conflicts among those who believe the idea of placing predatory wild animals in places like New Mexico is the height of foolishness to those who believe humans have no right to remove a species because it does what that species does naturally. In fact, those individuals believe that humans have a responsibility to help restore and enhance the lives of wildlife that they previously tried to exterminate.

"Reintroduction of the Mexican gray wolf was initiated by the U S Fish and Wildlife Service in March 1998," according to a statement from that Federal agency. "Mexican wolves living in the Mexican Wolf Experimental Population Area (MWEPA) are designated as a nonessential experimental population which allows for greater management flexibility to address wolf conflict situations such as livestock depredations and nuisance behavior. The MWEPA is a defined geographic area that encompasses Arizona and New Mexico from Interstate 40 south to the international border with Mexico."

Grant County is in the MWEPA.

"Reintroduction of a top predator such as the Mexican wolf is highly complex and often controversial," the statement from the U S Fish and Wildlife Service continued. "It is important to understand the role Mexican wolves are playing on the landscape, including all of the potential biological, social and economic impacts – be they good, bad, or indifferent. In order to continually evaluate this role, an Interagency Field Team (IFT) has been formed and has the primary responsibilities of collecting data, monitoring, and managing the free-ranging Mexican wolf population. Equally important is the IFT's close interaction and involvement with local communities directly affected by wolf recovery."

We'll be looking at some of those aspects in coming editions of The Chronicles Of Grant County.