Mexican Wolves Part Five Due Care In The Wild

Mexican Wolves
Part Five
Due Care In The Wild 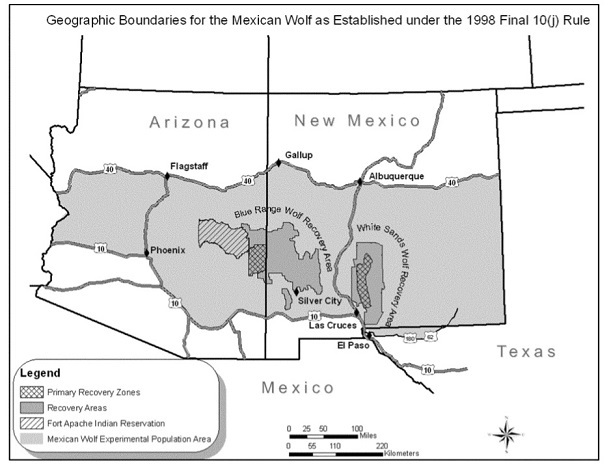 This map shows the initial geographic boundaries for the reintroduction of the Mexican wolf as defined in the 1998 Final Rule of the United States Fish and Wildlife Service. In 1998, Silver City and many of the nearby communities were included in the initial boundaries. Note that at that time, only those areas of Grant County north of Interstate 10 were within the territory designated for the reintroduction of the Mexican wolf. A subsequent map enlarged the boundaries. In 2015, the boundaries were expanded to include all of Grant County as well as all of New Mexico south of Interstate 40. (Map provided courtesy of the U S Fish and Wildlife Service, 2015.)

The Mexican wolf is a protected species under Federal law. What that means is that there are severe limits on what individuals can do in relationship to this animal.

While New Mexico has hunting seasons for a variety of animals, there is no hunting allowed of Mexican wolves. Under Federal law, “Taking a Mexican wolf with a trap, snare, or other type of capture device within Occupied Mexican Wolf Range…is prohibited and will not be considered unintentional take, unless due care was exercised to avoid injury or death to a wolf,” according to a statement from the United States Fish and Wildlife Service.

There are some exceptions to this policy as detailed in the 2015 Mexican Wolf Final Rule of the U S Fish and Wildlife Service. For example, taking of a Mexican wolf is acceptable “…in defense of human life,” according to the Federal government.

In addition, “On non-Federal lands anywhere within the MWEPA, domestic animal owners or their agents may take (including kill or injure) any Mexican wolf that is in the act of biting, killing, or wounding a domestic animal…” The term “MWEPA” is an acronym for the “Mexican Wolf Experimental Population Area.” This is a large area of the central and southern parts of New Mexico and Arizona. In New Mexico, all lands south of Interstate 40 – including all of Grant County – are within the MWEPA.

There are specific rules for any of these situations where exceptions may hold.

Please note that the 2015 Mexican Wolf Final Rule of the U S Fish and Wildlife Service is 56 pages long. Much of the text is in 11 point type with limited illustrations. It is quite detailed.

You can view the 2015 Mexican Wolf Final Rule by clicking here.

The U S Fish and Wildlife Service summarizes some of the key details about trapping activities included in this Final Rule. According to the Federal agency, “…due care includes all of the following:

A. Following the regulations, proclamations, recommendations, guidelines, and /or laws where the trapping takes place.

B. Modifying or using appropriately sized traps, chains, drags, and stakes that provide a reasonable expectation that the wolf will be prevented from either breaking the chain or escaping with the trap on the wolf, or using sufficiently small traps (less than or equal to a Victor # 2 trap) that allow a reasonable expectation that the wolf will either immediately pull free from the trap or span the jaw spread when stepping on the trap.

Future editions of The Chronicles Of Grant County will include details about other subjects related to Mexican wolves.