Silver City as viewed from Boston Hill.
(The photo was provided courtesy of Steve Douglas through Flickr, October 3, 2012.)

Grant County – then including territory that is now Hidalgo County and much of Luna County – wanted to join the Territory of Arizona. News reports at that time indicated that Grant County was among the wealthiest places in New Mexico.

On September 18, 1876, The Daily New Mexican in Santa Fe reported on its front page a dispatch from The Grant County Herald of Silver City that was dated two days earlier. The news article stated that Grant County was seeking to secede from the Territory of New Mexico to become part of the Territory of Arizona. (Neither New Mexico or Arizona had yet become states.) The news article noted that the local folks felt the interests of people in Grant County would be "...better understood by English-speaking legislators [in Arizona], most of whom are interested in mining and mining enterprises." The Grant County Herald also reported that people in Grant County felt that the "...county has been denied equal representation by New Mexico in the Legislative Assembly of the Territory..." This news article indicated that Lincoln and Doña Ana Counties might join Grant County in its efforts to join Arizona. In addition, the newspaper dispatch indicated that Colfax County might want to secede to join the State of Colorado.

A meeting was held in Silver City on October 4, 1876, according to a news article dated on October 14 in The Arizona Citizen of Tucson. The meeting was called "...for the purpose of considering the propriety of severing connections with New Mexico and annexing to the Territory of Arizona." Strong support, according to the newspaper, came from leaders as well as residents who attended the meeting.

The newspaper noted that among specific reasons cited at this meeting for Grant County to leave New Mexico included the proximity to the capital of Arizona (Tucson was then the territorial capital), that mining was a common interest between Grant County and Arizona, that local residents currently have "...little or no voice in the enactment of laws..." in New Mexico that could be "...remedied by the liberal-minded people of Arizona," that the powers that run New Mexico are "...in the hands of a selfish oligarchy...," that geography binds Grant County through the Southern Pacific Railroad with Arizona, and that attacks by the Apache on settlers could be better fought by "...means of common defence in the way of a militia system...inaugurated and carried out by a political union..." with Arizona.

A week earlier, on October 7, 1876, The Arizona Sentinel of Yuma indicated that people of Arizona would welcome the annexation of Grant County to its territory.

Comments printed in this newspaper give a perspective of attitudes of the time: "It is notorious that New Mexico has been governed by a small clique of unscrupulous demagogues, who control an ignorant and priest-ridden population, who comprise a large majority of the people, in their own way and for their own purposes."

The Arizona Sentinel concluded by stating that "Grant County, New Mexico, lies broadside to Arizona, our mines and agricultural and grazing lands run into each other, and if the people of that county desire to cast their lot with Arizona we do not think that any Arizonan would object. For our part, we would welcome them with open arms."

The issue was actually put to a vote of the people of Grant County on November 7, 1876.

On November 25, 1876, The Arizona Citizen noted a dispatch from The Grant County Herald that reported "...a nearly unanimous vote in favor..." of Grant County becoming part of Arizona Territory. "We hope therefore that Congress will act promptly in this matter and give a willing assent to the united voice of the people who are interested," stated The Grant County Herald.

House Resolution 796 – "...segregating Grant County from the Territory of New Mexico and annexing it to the Territory of Arizona..." - was introduced by Hiram Stevens, the Arizona Territorial Delegate in the House of Representatives in October of 1877. This, according to a news article dated November 16, 1877, in The Arizona Citizen; the newspaper referenced the Congressional Record dated October 30, 1877. The bill introduced by Delegate Stevens was referred to the House Committee on Territories. Any change in the borders between territories had to be approved by the U S Congress.

Leaders in Santa Fe, according to news reports, grew concerned about the potential loss of wealth if Grant County left New Mexico. With many in Arizona supporting the annexation of Grant County into that Territory, the leaders of New Mexico did not want to take the chance that the U S Congress might approve the annexation. The relationships between leaders in Santa Fe and Silver City "evolved." Changes took place. One of the most important occurred in 1878. In that year, New Mexico granted the Town of Silver City its Territorial Charter. This charter provided for self-government for the Town's residents. Silver City remains today as the only municipality in the State of New Mexico with this type of charter.

The U S Congress, needless to state the obvious, did not approve the transfer of control of Grant County from New Mexico to Arizona.

Today, Grant County, though smaller in size today as compared to its initial land area, remains within New Mexico. 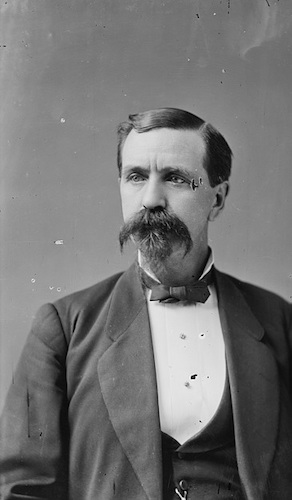 House Delegate Hiram Stevens of Arizona. (This photograph was provided courtesy of the Library of Congress, circa 1865-1880.)