The Chronicles of Grant County
10 September 2021 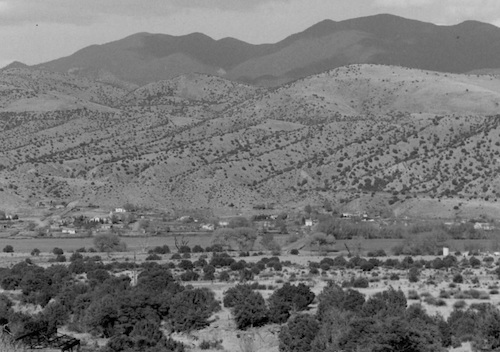 This photograph is looking north across the Mimbres Valley towards the San Lorenzo Historic District. (The photograph was provided courtesy of the New Mexico Historic Preservation Division and The U S National Archives and Records Administration, 1987.)

In 1987, the State of New Mexico and local folks asked the Federal government to designate much of San Lorenzo as an historic district. The U S government agreed and the San Lorenzo Historic District was created in 1988.

The District includes lands along "...the west side of Galaz Street and two blocks east of Galaz [Street] from one-half block south of G Street to one-half block north of D Street," according to the Nomination Form for inclusion in the National Register of Historic Places submitted by the State of New Mexico Historic Preservation Division.

"Nearly all buildings in the District are constructed of adobe walls and corrugated metal roofs and fall into the New Mexico Vernacular category," the Nomination Form detailed. "...N. Y. Ancheta established San Lorenzo in 1869. Ancheta was originally from Sonora and most of the other settlers [then from Pinos Altos] were [originally] from the State of Chihuahua. They dug an irrigation ditch that first year to water this the widest portion of the Mimbres Valley. The village was located just above the irrigation ditch, beside the most desirable location in the valley…The linear organization of the settlement along Galaz Street is typical of many, if not most, Hispanic farming villages of the period in northern Mexico and Hispanic New Mexico."

A map as well as a number of photos from the Nomination Form for the San Lorenzo Historic District are included below. A few details about each of these items are also included. The map and the photos were provided courtesy of the New Mexico Historic Preservation Division and The U S National Archives and Records Administration. To view a larger version of these photos, please see below.