Faywood Before It Was Faywood

The Chronicles of Grant County
22 September 2021 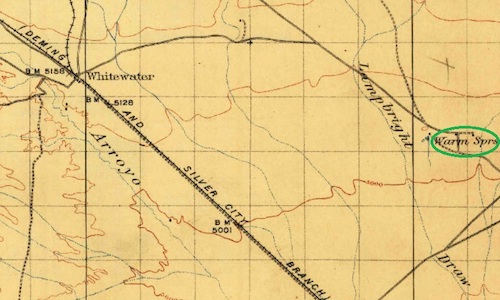 "Warm Springs" (in the green circle) was one of the names given to what is now the Faywood area of Grant County. The Faywood Rail Station (not shown on this map) was located farther south in Luna County. (This map was provided courtesy of the United States Geological Survey, 1909.)

Natural hot springs brought people to a section of Grant County long before Grant County existed. Prior to the area becoming known as "Faywood," it was known by other names. Among them: "Warm Springs," "Hudson," "Hudson Hot Springs," and "Hudson's Hot Springs." At the time of settlement by people from outside the region, the Apache lived here and the land was still part of Doña Ana County. (This ground did not become Grant County until 1868.)

The Santa Fe Daily New Mexican reported in a news article dated December 19, 1896, that settlers from outside the area took possession of the springs in this section of Doña Ana County in 1862. The newspaper stated that "in 1872, the property passed into the hands of Col. Richard Hudson...he erected an adobe hotel 80X80, and sent forth the discovery of a spring, the waters of which had worked some wonderful cures..."

Newspapers include differing accounts of the ownership of the springs as well as the hotel during these early years. One news report dated January 22, 1877, in The Daily New Mexican, noted that the hotel was owned by Dick Hudson and Isaac Stevens, the father of his wife, Mary; the Stevens family moved to Silver City from Colfax County.

That news article went on to describe the area: "Four miles from Mimbres City, on a down grade after ascending the bluff, we come to the Warm Springs, a very noted locality. The hotel for invalids [a term used at that time for people with disabilities], stage station and U S forage agency are located at the base of a hill some 60 feet in heighth, which rises abruptly from the level plain; the hotel building is roomy and comfortably furnished, and shaded by a gigantic cotton wood tree of great age; the bath rooms are supplied direct from the spring which rises very near to the apex of the rocky hill; the water is too hot for the human body but not hot enough to take the hair off a dog or goat. This spring is known far and near for its healing qualities, and it is becoming a popular resort for persons living in Southern New Mexico."

Devastation hit in 1891. On April 3 of that year, the Western Liberal of Lordsburg reported that "Wednesday night an incendiary fire destroyed the Hudson Hot Springs Hotel and its entire contents, during the absence of the proprietor and his wife at Deming. The [employees] asleep in the hotel narrowly escaped with their lives so secret and rapid was its destruction. The loss is estimated at $15,000 with no insurance, and the blow is a heavy one to Col. Hudson. There is no clue to the [villains] who set the fire..."

It appears that the Hudsons did not continue to reside in Hudson (then the name of the community) after the fire. On May 1, 1891, the Rio Grande Republican of Las Cruces reported that Dick Hudson "...has become proprietor of the Timmer House [Hotel] at Silver City…"

The Daily New Mexican reported on July 25, 1891, that two residents of Chicago had "...paid $52,000 for 2,100 acres of land adjacent to Hudson's hot springs..." Plans called for construction of "...an immense hotel to be made an all the year around health resort." The Southwest Sentinel of Silver City included a news item on December 27, 1892, indicating "...that a large hotel will be erected at Hudson's Hot Springs this year..." In March of 1893, a number of news articles detailed aspects of whether this new hotel enterprise was about to happen.

That project never did seem to get built.

Instead, in March of 1894, "...A. R. [Andrew] Graham became the owner and some months later succeeded in organizing a company known as the Hudson Hot Springs Sanitarium Company...," according to the edition of the Santa Fe Daily New Mexican dated December 19, 1896. This news article goes on to detail that Mr. Graham had a new hotel built here: "A short distance in the rear of the hotel is located the hot spring, the waters of which flow constantly at a temperature of 142 degrees Fahrenheit..."

The next edition of The Chronicles Of Grant County will continue detailing the history of what is now known as "Faywood." 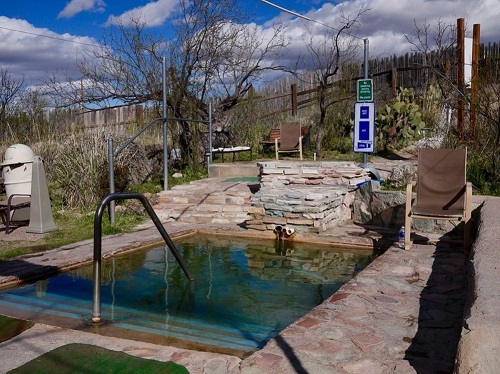 This is one of the pools at the Faywood Hot Springs located today in Faywood. (The photograph was provided courtesy of Joseph Reeves through Flickr, March 23, 2017.)