The Chronicles of Grant County
13 October 2021 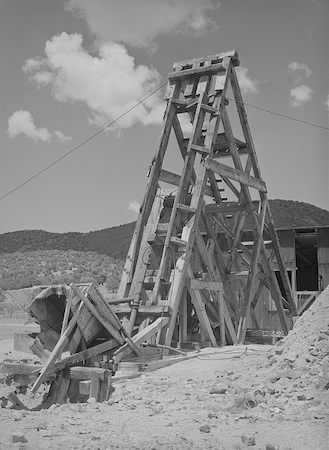 The head frame at an old gold mine at Pinos Altos. (The photo was produced by Russell Lee and provided courtesy of the Library of Congress, May of 1940.)

As noted in a previous edition of The Chronicles Of Grant County, Pinos Altos – "Tall Pines" in the Spanish language – was initially known by Spanish and Mexican people coming through the area as "Pino Alto" – "Tall Pine." The name "Pinos Altos" appears in print starting in 1863. In that year, the Santa Fe Gazette reported about "…the gold, silver, copper and other mines of Pinos Altos…" on April 25, 1863.

Why exactly the name went from singular to plural regarding pine trees is not known.

Mining was key to the development of Pinos Altos. Prospectors came from throughout the West (especially California), from Mexico, and from other regions to strike it rich. Some succeeded.

The Nomination Form for the inclusion of Pinos Altos in the National Register of Historic Places Inventory provided by the National Park Service noted that "An 1870 report by...[the] U S Commissioner of Mining Statistics stated '...Nothing but the remnants of better times are now seen at Pinos Altos...The town itself contains about 200 houses, one half of which are empty. It differs exceedingly from other American towns, and not to its advantage.'"

"Pinos Altos was designated the county seat of Grant County on January 8, 1869, with office facilities provided in a log house...," according to the Nomination Form. "Two years after Silver City's founding [1870], the county seat was removed from Pinos Alto into the new metropolis [in 1872], where it remains today."

Mining continued for decades after the transfer of the county seat, but the town's population decreased dramatically from its earliest days. In 1860, the Nomination Form reported that "...820 names were listed on the census report…" General James Carleton of the U S Army stated, according to the Nomination Form, that "…in October, 1866, the population of Pinos Altos did not exceed sixty miners, but in June, 1867, there were between 800 and 1,000 inhabitants."

In 2010, the U S Census Bureau indicated that there were 198 residents in Pinos Altos Census Designated Place. By 2020, the population had increased to 225 people. In the most recent census, 15.6% of the residents self-identified as Hispanic. According to the 2020 Census, there were 148 houses in Pinos Altos, 16 of which were vacant; the vacancy rate was 19.6%. 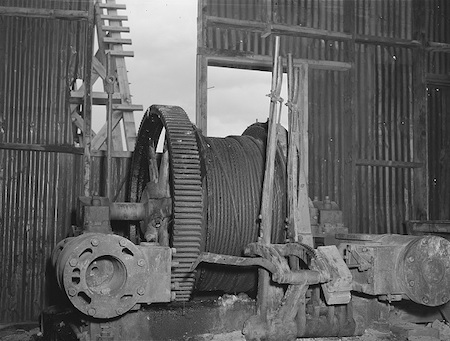 The remains of a steam winch in abandoned gold mine at Pinos Altos. (The photo was produced by Russell Lee and provided courtesy of the Library of Congress, May of 1940.)