The Chronicles of Grant County
18 November 2021 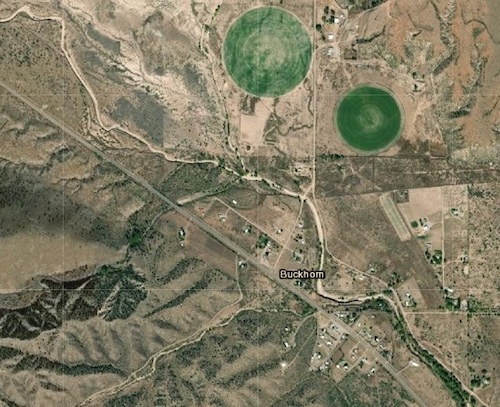 Buckhorn is located northwest of Silver City. (The map was provided courtesy of the United States Geological Survey, 2021.)

Located along Route 180, Buckhorn is a small settlement in Grant County. Various reports indicated that the place was named after the Buckhorn Creek. The waterbody itself was likely named after the horn of a deer (a buck).

Native Americans lived in this area for many years. People from outside the region that settled in this area found that their presence was not welcomed. The Albuquerque Evening Citizen reported on June 15, 1906, that "It is rumored that Indians in northwestern Grant County and southwestern Socorro County, are being blamed with stock depredations, and that reports are coming in daily telling of horse stealing and cattle killing, all of which is attributed to poor [word unknown], inasmuch as a large band of the [derogatory word] have been seen at Dry Creek and near Buckhorn creek recently."

A school existed in Buckhorn for some time, though the exact dates are unknown. According to a news article dated April 9, 1915, The Columbus Courier stated that "An incendiary burned down the Buckhorn district school building forty miles northwest of Silver City."

According to a news article dated March 15, 1917, in The Mountainair Independent, the New Mexico legislature had passed Senate Bill 25 and the Governor signed the bill into law to declare "...the road from Silver City in Grant County, which runs via Buckhorn..." was now a state highway.

Records in the National Archives indicated that the Federal government operated one of the Civilian Conservation Corps (CCC) camps in Buckhorn. News reports indicated that this camp operated for some time between 1935 and 1939. Happy Days, a newspaper of the CCC, included a letter from Harold St. John, company clerk at Company 3349 at Buckhorn, in its edition dated May 6, 1939. In his letter, Mr. St. John wrote that he noticed that the "...an inscribed medal [was being given] to the canteen steward doing more than a thousand dollars, we wish to inform you that our canteen did a business of twelve hundred and ninety ($1290.00) dollars in February and eleven hundred and forty-six ($1146.00) dollars in March. Nicholas Pushkar, the canteen steward, believes he will top both of those next month. [Mr.] Pushkar built the canteen, which is one of the best in the New Mexico District. This report is confirmed by Lieut. Thomas M. Boyle, Exchange Officer."