Local Geographic Features That Had Derogatory Names Are Now Renamed 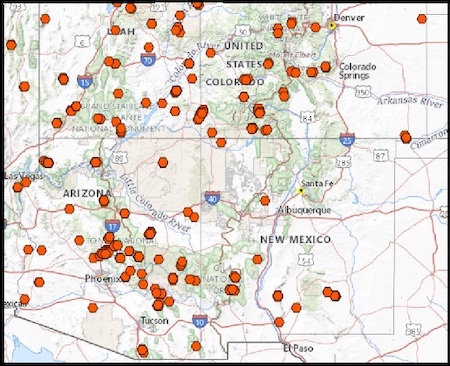 The red hexagons displayed on this map are locations of geographic features that have been renamed by the United States Department of the Interior. Each of these geographic features formerly bore "s***w", a derogatory name as determined by the Federal government. (The map was provided courtesy of the United States Geological Survey, September 8, 2022.)

The United States Department of the Interior had deemed "Squaw" (hereafter "S***w") to be derogatory and made the decision to remove "s***w" from all official names for geographic features in use by the Federal government.

That five-letter word is considered extremely offensive to many people. While there has been debate through the years whether that word simply meant a "female Native American," many have noted that the word has long been used as a vulgarity to describe a Native American woman.

The Derogatory Geographic Names Task Force, according to the U S Department of the Interior, included representatives from the Bureau of Indian Affairs; Bureau of Land Management; Bureau of Safety and Environmental Enforcement; National Park Service; Office of Diversity, Inclusion, and Civil Rights; Office of Surface Mining Reclamation and Enforcement; the U S Geological Survey (USGS); and the U S Forest Service.

The BGN is charged with maintaining "…uniform geographic name usage throughout the Federal Government," according to the USGS. "The BGN comprises representatives of Federal agencies concerned with geographic information, population, ecology, and management of public lands."

In its announcement of these name changes, the U S Department of the Interior noted that "the final vote completes the last step in the historic efforts to remove a term from Federal use that has historically been used as an offensive ethnic, racial and sexist slur, particularly for Indigenous women."

Secretary Haaland stated that "I feel a deep obligation to use my platform to ensure that our public lands and waters are accessible and welcoming. That starts with removing racist and derogatory names that have graced Federal locations for far too long. I am grateful to the members of the Derogatory Geographic Names Task Force and the Board on Geographic Names for their efforts to prioritize this important work. Together, we are showing why representation matters and charting a path for an inclusive America."

"Nearly 70 Tribal governments participated in nation-to-nation consultation, which yielded another several hundred recommendations," according to a news statement from the U S Department of Interior. "While the new names are immediately effective for Federal use, the public may continue to propose name changes for any features…through the regular BGN process."

The news statement continued by noting that "the renaming effort included several complexities: evaluation of multiple public or Tribal recommendations for the same feature; features that cross Tribal, Federal, and state jurisdictions; inconsistent spelling of certain Native language names; and reconciling diverse opinions from various proponents. In all cases, the Task Force carefully evaluated every comment and proposal."