Owls, sparkles and an owl conversation 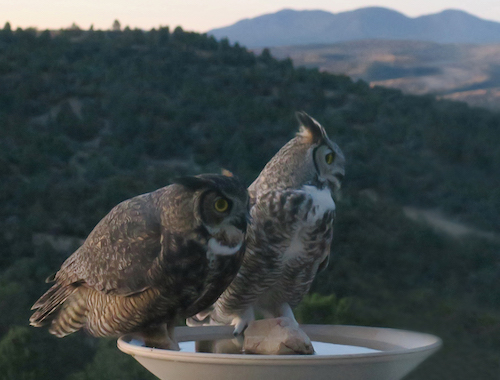 A friend sent me this awesome photo of two great-horned owls at her heated birdbath, which she says she loves. It draws all sort of wonderful birds to her place. She said she was about five feet away from them through the window. She was thrilled to catch the photo.

I love the great-horned owls who-whoo-who-whoos. I don't hear them much this time of year. Probably because the windows are closed, but I always appreciate hearing them during nights in the summer.

A few evenings later I had a special treat. No, not owls, but the misty rain we had all day that day, which, because it was chilly out, was fairly miserable to be out in. It redeemed itself when I went out with the dog after dark with my flashlight.

The smaller juniper trees appeared to be lit with sparkling lights where the light glinted off the drops of water covering the branches. Every color showed up in the light.

At first, I thought it might be frost, but it wasn't quite cold enough. When I touched a branch, drops of water rolled off.

It was like a winter wonderland, except no snow, just mists of water making the trees look almost white, with blues, reds, yellows and greens showing in tiny droplets.

Of course, my camera got a workout with the eight inches of snow we had at our house last Friday, Dec. 28. I don't have any tall boots, so my short boots didn't keep the snow out very well, but the photos were worth it.

After the snowfalls of the past days, I, as I always do, took the dog out. I heard a deep-throated great-horned owl in a nearby tree, calling who-who-whooo-whooo. Imagine my surprise when from the other direction, in a higher pitched call, an answer or a new question? Whoo-whooo-who with an upward tilt to the pitch of the last short who. Male and female? Male and juvenile? I couldn't see either and didn't want to scare them off with the flashlight shining at them. I was enjoying their conversation too much. Wonder what they were saying to one another?

Days are special around here, and nights have their own charm. On clear nights, I love the stars sparkling in our dark skies.