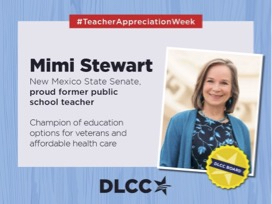 Acalanes High School Built 1965, Lafayette, Calif The DLCC applauded Stapleton and Stewart for their legislation to improve school buildings reasoning this would improve student performance. An example of this fallacy is Del Norte High School in Albuquerque. Del Norte and Acalanes High School in California were both built in 1965. However, Del Norte was torn down and rebuilt in 2010 while Acalanes is still educating students in their original facility. Today Del Norte is ranked 13,394 and Acalanes is ranked 699 nationally. They want voters to focus on the quality of buildings instead of the quality of education.

In September 2021 Representative and Albuquerque Public School teacher Sheryl Williams Stapleton was indicted on twenty-eight federal felony charges. It is reported that $3 million of $5 million her company received from APS was funneled into her personal account. Neither NM Auditor Colon nor the NM Ethics Commission ever investigated their fellow Democrat and the DLCC still applauds Stapleton on their website.

Stewart, Stapleton, and the teacher unions lobby voters to invest in education so they can provide our children with a good education. In reality, more money is spent every year on education while New Mexico continues to be ranked at the bottom. It is time for unions to be taken out of the education equation. The New Mexico Ethics Commission should investigate this fraud on the people of New Mexico.

Only in New Mexico

You read it here first: Spaceport America: The Fleecing of New Mexico. Three weeks later that story was on the front page of newspapers across the state. Even Steve Pearce reported on the story I broke. A shout out to The Grant County Beat for posting the story and scooping the big city papers.