View from the Edge

Peter Riva of Gila has offered his many years of columns for this online newspaper. His writings have been published in East Coast newspapers, and he decided to share them with the Beat and you, our readers.

Labels Have Meaning—Often The Wrong Meaning

April 9, 2020 - The word liberal means open-minded, open-handed, generous. But in today's America it is either a compliment meaning you feel for a more common purpose rather than the self or it can be used as a derogatory statement meaning you are artsy, or against the state, the flag and host of other neo-conservative values. The dictionary definition no longer means very much in the vernacular use in the media or political discourse.

Similarly, the definitions and understanding for socialist and socialism now vary wildly. When first used in 1830, socialism meant that ownership of property or values could be controlled, held, by social contract between peoples. In a sense, household insurance was originally a social compact: we all put some money into a pot in case one house burns down, thereby our contribution has social value to the one who lost their home. Seen as an extension, the military we have today is a social compact, as are most of the items we take for granted like roads, schools, airwaves, etc. We all chip in, fulfill our social contract for the social benefit of all, not merely the self.

April 3, 2020 - "The best way to get beaten up professionally is to claim you have a pre-Clovis site." Said Michael Collins, U. of Texas. The academics are warring and, sometimes, taking on the Native American tribal councils as well. Why? Seems that they've discovered that many early Europeans were the first to arrive in America and they are still here. And Anna Roosevelt working at the mouth of the Amazon is working on Benin, Egyptians, Phoenicians, and later Romans who were there. In Del Mar in California is an ancient human site—dated to 48,000 years ago.

Clovis is the site in New Mexico that was considered the oldest human settlement site in America. Recently, several other sites have turned up with much, much, older tools, dates and relics. Every time one of these sites has turned up, the researches have been called frauds, crooks and, sometimes, stupid. The first to encounter this wrath was Prof. Adavasio who dug up blades and cut flint in Pittsburgh dating back 18,000 years. Some fellow scientists who backed him were threatened with black balling.

March 27, 2020 - In my copy of Churchill's "The Second Word War" there's a quote that I feel applies to our situation, in fact to all countries' situation in this pandemic: "There is no worse mistake in public leadership than to hold out false hopes soon to be swept away… people can face peril or misfortune with fortitude and buoyancy, but they bitterly resent being deceived or finding that those responsible for their affairs are themselves dwelling in a fool's paradise."

Unfortunately, that's the situation we are living in; those responsible are themselves deluded as to reality. And, yes, that includes the Administration, but it goes much further than that.

All across the planet twenty years ago a movement started—urged on by Wall Street, Frankfurt, and all those other money counters… to reduce corporate costs by avoiding the need for warehousing. "Just In Time" manufacture became the new currency, the new mantra.

The Truth About Food Poverty

March 19, 2020 - I find it very disturbing that charitable feeding is being institutionalized in America. It almost seems like a throwback to Victorian, or pre-1900 times. Let's be clear, there is a huge amount of goodness and kindness in what these charities are doing—out of draconian necessity to be sure—but do we really want to live in a country where our children are fed by charities rather than a country where people are paid properly and can afford to feed their own children?

Action Against Hunger, Feeding America, Bread for the World, Food Bank of (name any state), Freedom from Hunger, The Hunger Project, Heifer International, Schools' Backpack Programs, almost every church or social organization… the list of groups and institutions is growing annually—all devoted to trying to plug the gap in societal food inequality.

We groan about the taxes we pay to allow kids to get meals in school for 180 days a year—sometimes breakfast and lunch.

It’s About The Beds, Stupid!

March 12, 2020 - We’re in the middle of another cataclysmic event for America and the world – but America always learns precipitously and leaps to solutions—sometimes good, sometimes bad. The last cataclysmic event was 9/11. Within a week of that event corporations changed from risk-takers to decisions by committee in an effort to at least feel stability could be returned. In the process, much of the greatest individualism traits of American business were swept aside in favor of corporate think instead of entrepreneurial think. Boeing senior staff moved away from a hands-on managerial style and established one-step-up-only management systems like the military, thinking that would bring stability and risk-avoidance. The most senior management left the plant in Washington and moved to Chicago, losing contact with the very engineering feedback that made the company great. Result? We’re seeing it with the 737 Max.

GE made a decision along similar lines and told NBC, overnight, to disregard any proposal for less than $25,000,000 and (I was on the receiving end) dropped projects they had green-lighted already. Result?

"Kidnapped On Safari" for the holiday gift giving season! 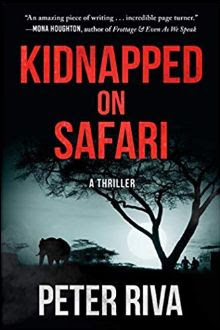 Okay, it’s coming up to Hanukkah and Christmas—not to mention Kwanzaa! And so, once again, with some sensation of red-face here, I am nevertheless excited to announce my book Kidnapped On Safari comes out in mid-January—and I need your help.

So, I am writing to ask for your help, as a friend, to help get the book off to a great start.

A Few Things You Can Do That I Can’t (sadly, it is how publishing works these days);