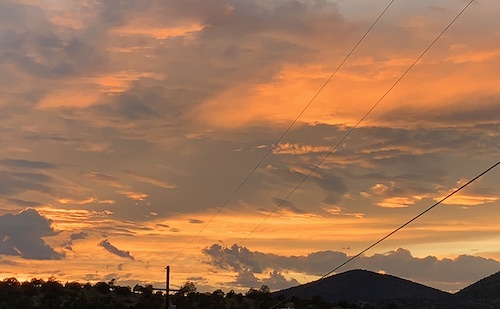 Yesterday evening’s blaze of a sunset soon after 7:30ish

Prediction —Take it with the same grain of salt you would take a weather prognosticator’s prediction.

I predict that yesterday was the last day of the 2021 regular monsoon season in southwest New Mexico. Sure, we can still get some showers.

Why do I say that? For the next week, the greatest chance of precipitation is 8 percent one day, with most days being 0 percent to 3 percent.

More than a week out, weather forecasters are saying a 24 percent chance of rain exists and then it drops down into the single digits again. [Yes, I’m using the weather prognosticator’s predictions to base mine on, with the same grain of salt.]

The end of the monsoon went out with a bang. Lots of bangs from thunder and the lightning that caused them. Not a drop of rain where we live, but at least four or five big thunderstorms went through the area.

And the daytime ended with a blaze of a sunset, pictured above.

I heard from a friend who lives near White Signal that it rained there off and on most of the day yesterday.

We got some of the earlier rains here just north of Silver City, while they got none in the White Signal area.

It seems to me that Silver City benefits the most from a lot of these showers, but that just may be an envious observation from when I get rained on in town, but not at home.

Precipitation since January 2021, which includes snowmelt in the gauge, has totaled 12.72 inches, surpassing last year’s feeble 9.4 inches at about this same time. I have heard that our average annual precipitation is about 14 inches. We have a very good chance of surpassing that this year.

We can hope that more precipitation will come in the months ahead as rain showers and then with nature’s help some nice snowfalls in November and December.

In one of the first years after we moved here, we experienced a beautiful large snow event in early November, so anything is possible.

This year, I’ve watched the native grasses grow taller than they have the past few years. One especially tall stalk I stood next to this morning reached my armpit! And I’m not short.

I’ve also greatly admired the wildflowers that have made an appearance this year. Some I’ve seen in years past, but some I hadn’t seen in our landscape, but only in the mountains during good rain years.

Unfortunately, I have not had the chance to visit the forest this summer. I’m sure I’m missing awesome floral displays. I’ve heard from another friend that the mushrooms are outstanding this year.

Look around you; look at the flowers along the roadsides you travel; observe the changing grasses as the seeds mature; stop and admire the beauty all around you.