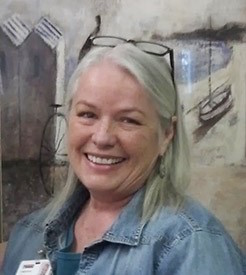 National Center for Frontier Communities (NCFC) wants to shine that light on one person of the 5.8 million people that live in the frontier, our nation’s most remote and isolated regions of rural America. This individual has dedicated their life to the bettering the health and welfare of their neighbors; thus, earning the distinction and honor of being the 2019 NCFC Frontier Health Star: Chris DeBolt of San Lorenzo, New Mexico.

San Lorenzo is a small, census-designated place of 97 residents nestled in Mimbres Valley, located at foothills of the Rocky Mountains. It’s designated a Far and Remote (FAR) Level 4, which means it is an hour or more travel time from Urbanized Areas - 50,000 or more population - and 45-minutes or more from Urban Clusters - 25,000-49,999 population.

DeBolt has called San Lorenzo home for more than 12 years. There she has been an advocate for her neighbors’ health and wellness by bringing services to the small community that otherwise not have access to them.

“We have a responsibility to rural and frontier people to have equal access to care, like anyone living in a metropolitan area,” said DeBolt.

Over the last 13 years, Debolt has been part of the Mimbres Valley Health Action League (MVHAC), a grassroots community group which advocates for the 1,612 people that call the 91-mile long valley, along which the Mimbres River ambles, home.

One of the major successes of the League is the annual Mimbres Valley Health Fair that has been occurring for 13 years in partnership the Harvest Valley Festival every September.

“This year over 400 people attended the health fair with 275 flu shots administered by Walgreens,” said DeBolt.

“Every year I see people, like vulnerable seniors and other people dependent on the health fair come in and say, ‘I’m here for my annual health check,’” said Debolt. The health fair offers blood pressure check, skin cancer exams, well water testing and in the past, a variety of blood tests and other vital exams all free to residents.

DeBolt said of her frontier efforts, “My motto is to work locally where I live.”

NCFC Executive Director Susan Wilger said of Debolt, “Chris loves living in the Land of Enchantment and is dedicated to promoting the well-being of her community and New Mexicans. Her wisdom, compassion and commitment has benefited countless individuals, organizations and initiatives.”

“It’s our responsibility to level the playing field and advocate for health equity. Everybody should have access to health care and get what they need to have a healthier life,” said Debolt.

That philosophy and dedication to her frontier community is why DeBolt is the 2019 NCFC Frontier Health Star.

Check out Pets to Adopt. The High Desert Humane Society has some new cats and dogs up for adoption.

Feel free to notify editor@grantcountybeat.com, if you notice any technical problems on the site. Your convenience is my desire for the Beat.