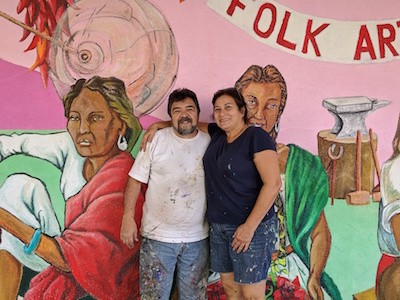 One of those projects is a mural depicting New Mexican folk arts. The mural is located adjacent to the Main Street Plaza where The Future Forge operates a weekly Maker’s Market supporting local artisans. The concept for the mural came from reflecting those artisans and celebrates the many talents and culture of New Mexico. The mural is located on the south side of the Encore building at 704 N. Bullard and faces a future parklet and pedestrian entrance into the Main Street Plaza. 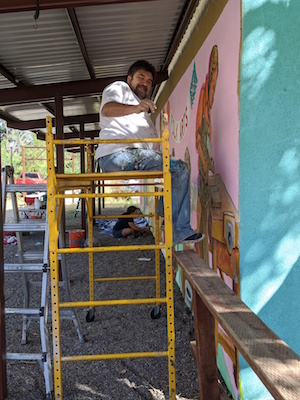 Carlos painting“New Mexico has a long tradition of folk arts that truly make this land of enchantment, enchanting,” states Callejo. The mural depicts pottery making, weaving, wood carving, folk music, ballet folklorico, santos, glass blowing, basket weaving, woodworking, farming and cooking, and metal working. The mural is beautiful, colorful, and has so many elements, it is truly a joy to look at. Silver City MainStreet hopes it inspires young people to learn and continue the culture of New Mexico folk arts.

Carlos Callejo is not new to Silver City. He painted a wonderful mural that is housed in the Murray Ryan Visitor Center and this past year also completed a mural at the southwest corner of Theodore and Richard streets, in one of Silver City’s oldest neighborhoods on Chihuahua Hill. That mural depicts the cultural and economic influences of Silver City.

Callejo was born in El Paso, Texas and at the age of nine moved to Los Angeles, where he pursued a degree in graphic arts at California State University and studied at Ottis Art Institute. He has more than thirty years of experience in coordinating, directing and executing public art projects. As a public art advocate, he has earned a reputation for expertise in muralism.

Callejo has played a major role in over 40 mural projects both nationally and internationally. He has received public recognition and formal commendations from public officials, art institutions, schools and community groups who have benefited from his artistic talents and his dedication to community empowerment.

The Clean and Beautiful Grant Program funds projects and initiatives that contribute to the following established goals, as identified through Keep America Beautiful and the Litter Control and Beautification Act: end littering, reduce waste, beautify communities, empower youth, and increase program capacity. More information about this program is available on the NMTD website.

The mission of Silver City MainStreet is "To encourage a vibrant, historic downtown Silver City that is recognized as the heart of our diverse community." Please visit our website, www.silvercitymainstreet.com to learn more.