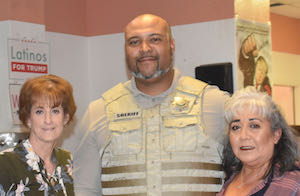 L-R: Peggy Tavizon, Jason Jordan, and Christine StarrOn Tuesday, October 5, 2021, the Republican Party of Grant County recognized two of the county's local law enforcement to thank them for outstanding service to our community. The organization was honored to do this and intends to continue this every month. One recognition came from the Grant County Sheriff's Office, and one from the Silver City Police Department. "We are hoping in the future to include the local State Police and first responders," a spokeswoman said.

The deputy this month was Corporal Detective Jason Jordan. Jordan started his career with the Grant County Sheriff’s Department in 201l. He started as a patrol deputy and quickly advanced to a supervisor as he was promoted to corporal. Jordan is always challenging himself. 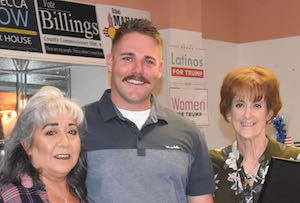 Christine Starr, Brendan Shannon, and Peggy TavizonThe officer this month was Patrolman Brendan Shannon. Shannon is a lifelong resident of Silver City. He joined the Silver City Police Force in 2017 after graduating from WNMU with a Bachelor of Science and policing. Since joining he has performed his regular duties and participated in many special operations with local detectives and narcotic agents. As a result, he has received compliments and accommodations from community members and his supervisors for teamwork, compassion and effective policing style. Shannon recently received the Medal of Valor, which is given to officers that go above and beyond the call of duty. He is hoping to further his career with the SCPD in becoming a K9 officer. He received a certificate, challenge coin and NM Blue Line Pin, presented by Peggy Christine Starr and Peggy Tavizon.