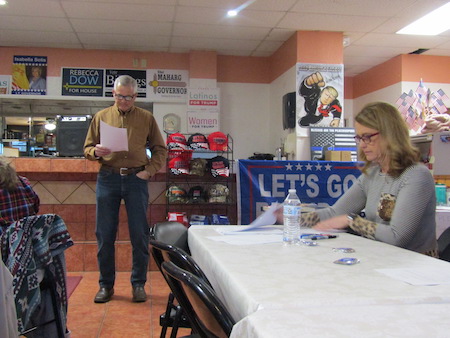 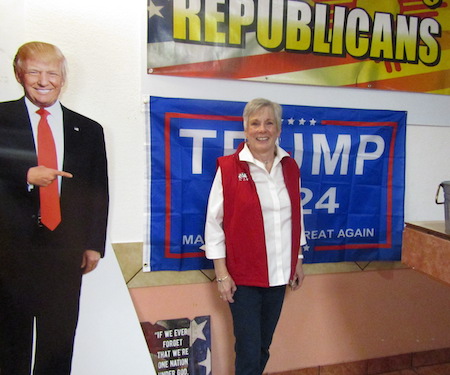 Member Carolyn Miller poses by image of Donald J. Trump and in front of signs.Article and Photos by Frost McGahey

It was open to all registered Republicans of Grant County who have been registered for at least 6 months. This 6 month requirement was added to prevent someone from changing party affiliation right before the convention. No ID was required.

Seven delegates were selected out of a slate of nine to attend the state-wide convention along with the five members of the executive committee. Grant County is allowed 12 delegates. This is based on how many Republicans voted in the 2018 gubernatorial election. That was 4070 and is divided by 400 and rounded up to twelve.

One Republican said, "I'm delighted that I can purchase here a Trump 2024 hat and a Let's Go Brandon flag for my husband. I didn't know where I could buy them locally."

A representative for Congresswoman Yvette Herrell attended the event who is running for re-election. She unseated Xochiti Torres-Small who is now serving as undersecretary of agriculture for rural development at the U. S. Dept. of Agriculture. (Author's Note: No one seems to know who will run against Herrell even though a Democratic organizer director has been hired to flip congressional district 2.)

Brigadier Gen. Greg Zanetti (ret.) was the only candidate for Governor who attended in person. Richard Miller, Chair of the GCRP said, "Mr. Zanetti was very personable and delivered his message effectively."

The Republican Party of Grant County Headquarters is on Hwy. 180, next to the Valero gas station and across from Pinnacle Propane. It is open on Wednesdays from 1:00 to 3:00 pm. Hats and posters can be purchased, costing between $15 and $30.