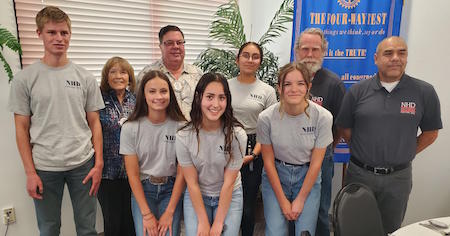 The students were introduced by History teachers Lee Wilson and Claudie Thompson, who have coached National History Day (NHD) teams and have had them attend the Competition in Washington, DC, for fourteen years. To qualify to go to the National Competition, teams must first compete at the regional and State level.

This year, the full team, consisting of fourteen students and their two advisors will be leaving for Washington on June 8. In preparation for their trip, they have been working to raise the necessary funds to pay their expenses.

In introducing the students, Thompson said “this is the most competitive educational program in the country, and one of the highest honors Silver High School students can receive.” The students compete against schools from every state in the union, and several international schools.

In preparation for the Competition, the students start planning and working on their projects in the fall. Students work together in teams of one or more to (1) write a paper, (2) prepare an exhibit, (3) film a documentary, (4) create a website, or (5) put on a performance. This year’s overall theme for the competition was “Debate & Diplomacy in History: Successes, Failures, Consequences.”

Student Maleah Diaz, this year’s class valedictorian, started the presentation about her project by saying “this is by far the best educational course ever.” She and her partner, Elizabeth McDonald, did a group documentary on The Partition of India. Claudie Thompson pointed out that the paper as well as each of the other projects required significant research and had to be accompanied by an extensive bibliography.

Daniella Holguin presented an individual website describing the debates leading up to Creation of the First National Bank of the United States.

Finally, Lauren Brueggeman introduced a video group performance on The Women Who Promoted Human Rights through Debate and Diplomacy. Included in the performance, in addition to Lauren herself, were three other students: Sophia Abeyta, Addison Drennan, and Faith Pellegrino.

At the conclusion of the program, Jim Callender, Rotary Club co-president, congratulated the group and presented them with a check in the amount of $500.00 as Rotary’s contribution to help defray the cost of their Washington trip.