Reps Herrell and Westerman Reveal How Feds Use ESA to Hurt Agriculture, Energy, and Land Rights

WASHINGTON - Rep. Yvette Herrell has joined Rep. Bruce Westerman (R-AR), Ranking Member of the House Natural Resources Committee, to publish an editorial on how Washington politicians allow the Endangered Species Act to be weaponized against farmers, ranchers, energy producers, and other American landowners. They write that local control and conservation efforts are essential to preserving endangered animals in America. 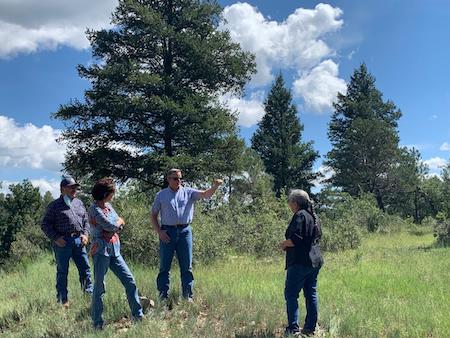 No Need to Choose Between Environment and Economy

New Mexico is home to five national forests, two national parks, and even the iconic Smokey Bear. It's a hotbed for oil and natural gas development, with the Permian Basin accounting for 35 percent of U.S. crude oil production and 15 percent of U.S. natural gas production. In fact, the oil and gas industry provide more than 130,000 jobs in the state and contribute 30 to 40 percent of the revenue for the state budget.

Unfortunately, it's also quickly becoming ground zero for the disastrous impacts of the Endangered Species Act (ESA). Species like the Lesser Prairie Chicken, Texas Hornshell Mussel, Dunes Sagebrush Lizard, and Mexican Spotted Owl inhabit various parts of the state, their protected areas often threatening economic development and rural communities. The Spotted Owl has been listed since 1993, a time when Whitney Houston and Janet Jackson were topping the charts. Almost 30 years later, the ESA listing hasn't kept up with the times (and remains far less popular). That's even while New Mexico has been leading the way in developing Candidate Conservation Agreements with Assurances (CCAAs) with the U.S. Fish and Wildlife Service to help preserve these species.

This is because we've been sold a false narrative that claims we cannot have both a strong economy and a healthy environment. Here in New Mexico, we have the opportunity to prove that these are not mutually exclusive goals. Yet because of the ongoing politicization of the ESA, it is becoming increasingly difficult to do.

During his tenure, former President Donald Trump introduced regulatory reforms that cut red tape, reduced government overreach, and most importantly listened to stakeholders from communities where these species lived.

Today, President Joe Biden and his administration have introduced a tone-deaf rollback of these ESA reforms, weaponizing the law against rural Americans, bogging them down in years of litigation, burdensome requirements, and government regulations.

Even worse? The Biden administration seeks to remove a rule that would ensure that critical habitat designations do not cripple local economies. For example: in New Mexico, the listing of the Mexican Spotted Owl crushed our timber industry by making it far more difficult to conduct forest management projects. We lost thousands of rural jobs and are now facing catastrophic wildfires that threaten those same communities. If this Trump-era rule had been in place then, we may have been able to avoid disaster.

Local voices and economies should be leading the discussion across the nation. That's why we recently introduced legislation to codify the Trump-era rule to ensure that Washington does not run roughshod over rural communities. The rule gives the Fish and Wildlife Service the authority to exclude areas from being designated critical habitat under the ESA if the economic impact of doing so outweighs the benefits to the specifies. By codifying this rule, we are putting power back into the hands of Americans who know their environment and economies best.

In New Mexico, this means that Eddy and Lea County, two of the biggest oil and gas producing counties in the state, can continue balancing conservation efforts for these species with energy production. It means local jobs stay in the communities because projects can continue making progress. It means America can rely on this domestically produced energy to power our homes and cars, while also ensuring we are conserving species for generations to come.

Most importantly, this rule shows we do not need choose between a strong economy and a healthy environment: we can have both.

This editorial was originally published by the Roswell Daily Record, and can be found in their print and e-edition for November 19, 2021.