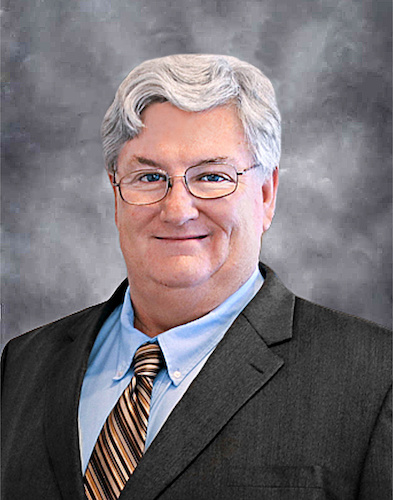 Jim Foy, the current Sixth Judicial District Judge in Division III in Grant, Luna and Hidalgo counties, announces his candidacy for the position. Judge Foy was born in Silver City and raised in Bayard. He attended St. Mary's Academy, graduated from Cobre High School in 1979, graduated from Creighton University in 1983 and graduated from the University of New Mexico School of Law in 1986. In October 1986, Judge Foy joined the New Mexico Bar and started his career as a licensed New Mexico attorney. "I was fortunate to be able to move back to Grant County and to help people with their problems." Foy said.

Since 1991, Judge Foy has been married to Valvina Arsola Foy. Jim and Val were married at St. Vincent De Paul Catholic Church. Foy has two grown children Valerie and John. He is also a grandfather. Judge Foy is the youngest son of former State Representative Thomas P. Foy and former Grant County Democratic chairperson and master bridge player Joan C. Foy. Judge Foy worked with his brother Tom Foy, Jr. while in law school and became passionate about the practice of law. Foy practiced law with many fine lawyers. Most notably he practiced with his father, Sue Jollensten, and retired Court of Appeals Judge Celia Foy Castillo. "Sue, Celia and Dad provided me with proper guidance and mentoring as a young upstart lawyer. I could not have achieved and accomplished competence as a local hometown and home grown lawyer without them" Foy said.

Judge Foy started as an associate attorney for Foy, Foy and Jollensten. After a few years of practice, he was named a partner in Foy, Foy and Castillo. Foy practiced law throughout New Mexico in both the state district courts and in the Federal Courts of New Mexico, Arizona, Texas, the Tenth Circuit Court of Appeals and the United States Supreme Court.

In 1996 and 2000, Judge Foy, a lifelong democrat, was elected as the Sixth Judicial District Attorney. He prosecuted criminal activity in Grant, Luna and Hidalgo counties. In late 2003 and in all of 2004, Foy was the original Sixth Judicial District Judge appointed in Division III. In 2005 until March 25, 2019, Foy engaged in the private practice of law representing over one-thousand five hundred private paying clients on various legal matters.

Foy also represented municipalities like the City of Deming and the Village of Columbus. As an attorney, Foy has represented both Plaintiffs and Defendants, Petitioners and Respondents and children. As an attorney, he has represented all sides in hundreds of different lawsuits. He has protected his client's individual rights. As your judge and previously as an attorney, Judge Foy has seen all sides of most types of legal problems and is therefore best qualified to act fairly and impartially for you. "I have been around a while, I have watched many Judges take action in thousands of varying type cases. Each of those judges have helped make me a better lawyer. As a young lawyer starting out in my legal career. I remember practicing in front of retired Magistrate Judge Y. B. Morales from Bayard. He taught me to be courteous and respectful of all litigants regardless of where they come from and lastly to be equitable when making your decision. As a young lawyer he was a great mentor and I am grateful for his help and his contribution to my legal career." Judge Foy said.

Judge Foy has been active in our community. He was a small business owner for over twenty-five years. He provided first jobs and training for many local young people who came from diverse backgrounds. Many of his employees started as a legal assistant at Jim Foy and Associates right out of high school. He trained them and now many of his first job employees work in much higher paying jobs with much greater responsibility. Judge Foy has also assisted new lawyers in our community. "I am proud to have provided a diverse group of young men and women their first full-time job or part-time job out of high school; and I am proud of where many of my past employees have landed. Some have been police officers, firefighters or miners while others work in government employment. Each using the skills they learned while working for me" Foy said.

Judge Foy was on many not-for-profit governance boards of directors like El Grito Head Start. He was an Adjunct Professor at WNMU and at the National Prosecutor's College at the University of South Carolina. Judge Foy coached Little League Boys baseball and Little League Girls softball. Foy also assisted in coaching Cobre Youth Wrestling at the program's inception in 1979. As a tribute to his brother and his parents' legacy, Judge Foy, along with his family, have provided numerous scholarships to local students' college endeavors. Being an active community partner has always been a benchmark of success for Judge Foy.

Judge Foy's connection to our community, his education, his legal experience, his local understanding and coaching/mentoring experiences certainly qualify him to be your District Judge. Foy's experience having been on both sides of a lawsuit representing real people with real problems makes him best suited to act in a fair and impartial manner. "All a judge can do is act courteously, let all sides have their say and then with wisdom, rule on the matter following the law as applied to the facts as presented. As your judge, I pledge to act fairly and impartially in all cases before me. I would humbly ask for your vote and support in the November general election. Please vote for Jim Foy, democrat, Sixth Judicial District Judge, Division III."