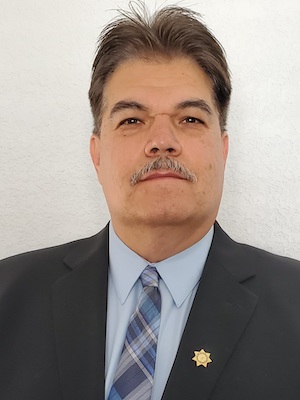 My name is Raul D. Villanueva. I am a Democratic candidate for the office of Grant County Sheriff. I believe that I am qualified for this position, in part because I have served the citizens of Grant County in law enforcement for nearly three decades.

About ten years of that time has been as the Grant County Sheriff. However, there is more to being sheriff than simply having time in office. I believe that a sheriff should not only be a successful and experienced law enforcement officer, but he or she should be a community leader, a leader who works for the betterment of the county. The sheriff should work with local businesses, he should establish relationships with community agencies and he should actively be involved with activities that affect our children. I was that leader and I will be this leader again once elected.

I began my career in law enforcement in Hurley, NM in 1990. I then worked for the Silver City Police Department for two years, until I achieved my goal of working for the Grant Sheriff’s Department. Between 1995 and 2008 I worked as a deputy sheriff, a corporal and a sergeant for the county. Then, in 2009 I was asked by the County Commission to take on the sheriff’s role as our sheriff left office mid-term. There were higher ranking officers than me, but the county trusted my judgment and work ethic. After that appointment, I ran for office twice and was elected each time by the citizens of Grant County to be their sheriff. I would have run for a third term, but New Mexico law only allows two consecutive terms and then you must sit out one term. I am eligible to run for office again, now that I have been out of office for one term,

If you like to learn more about me or ask me questions, I encourage you to call my cell phone at: 575-590-1969. Or, you may send a message to me at: Villanueva4Sheriff@gmail.com

Thank you for taking the time to read about me.