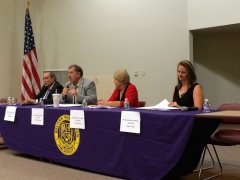 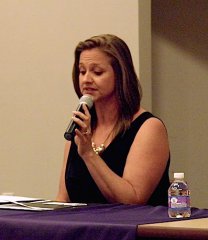 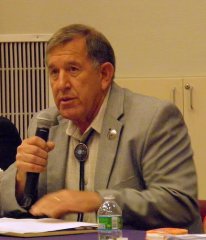 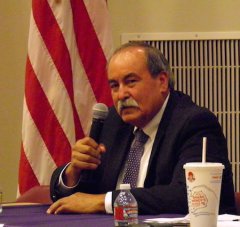 Each candidate drew a number in which they would be answering the questions.

Scott Terry, SC-GC chamber director, served as moderator. He drew the already prepared questions one-by-one. No audience questions were allowed. The first to answer the question would have two minutes, and the opponent would have one minute. It was requested that they be no applause between questions.

Before questions, each candidate had a two-minute window to give an opening statement. They gave them in the order they were seated, right to left from the audience point of view. Each at the beginning of the statements thanked the organizers and the audience for attending.

"New Mexico is my home," Dow said. "Although I always register people to vote, and I support the candidate of my choice, I have never been involved in state or local politics before. For the past 18 years, I've been involved in civic and community groups advocating at the state and local level for early childhood issues, for child welfare, and for rural economic development. I'm an everyday citizen, frustrated by current politics, so I decided to do something about it. So I've been running for the past six months to ask for your vote to a volunteer position. My job as your representative is to be your voice and to represent your values. Our shared culture will shape my decisions, as well as a strong desire to protect the Constitution and the Declaration of Independence. I will not forget where we come from, and I ask for your support on Nov. 8."

Hotvedt said she would take a slightly different tack. "I was a small business owner for 25 years, and I wanted to mention how small businesses are really the backbone, not only of our economy, but also our communities here in New Mexico. We have certain economic drivers throughout our districtG