Editor's Note: In the interest of getting the rest of this information out in a somewhat timely manner, most of this article, after the opening statements which are almost transcriptions, will be written from quickly taken notes. The editor will also endeavor to post the more than one-hour audio recording, if possible. 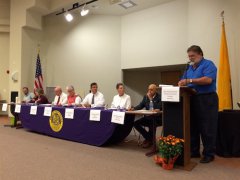 All candidates thanked the sponsors and organizers as well as welcoming the audience members.

Scott Terry, SC-GC Chamber director, moderated the event and asked the questions, which had been prepared and given to the candidates ahead of time. He asked that there be no applause once the questions started.

"I spent two consecutive terms on the Grant County Commission, 2001-2008," Torres continued. During this period, he said the commission faced and addressed significant financial and administrative challenges. Also during his tenure, the county bought land for a new Detention Center, kept Fort Bayard Medical Center in Grant County and bought the old Stream building for a conference center.

Edwards said from her first job filling the shelves at her mother's pharmacy to serving as the president and CEO of a multi-million dollar company she helped build, "my life has gifted me with a broad range of skills and capacities." When she moved to Silver City 12 years ago, she opened a small business, a design company where she designed graphics for non-profits and small businesses. "I did a portrait story of women who walked the picket lines during the Empire Zinc Mine strike." As part of the story she went to the site and learned the stories behind the strike.

"When I went to work at The Volunteer Center, and learned that poverty is the underlying problem behind those who need volunteer assistance, we started a series of community conversations about how to end poverty in Grant County," Edwards continued. "In partnership with many community members, I helped create the Commons and Nuevos Comienzos Community Kitchen, and a small business incubator at 501 E. 13th Street." TVC serves more than 1,000 meals a month and "has provided more than 10 million meals to hungry children, seniors and their families in the past eight years." These programs include the Backpack program that sends food home with school children, who don't get enough to eat on the weekends, and the first ever mobile food pantry in the Mining District for those suffering from the mine layoffs. She is the founding member of the Grant County Food Policy Council and the Grant County Community Foundation. "Currently I am the Healthy Kids, Healthy Community coordinator, and serve on the Grant County Community Health Council and the Southwest Food Policy Council. I am passionate about justice both personally and professionally."