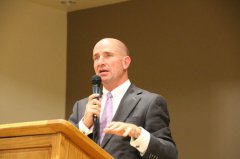 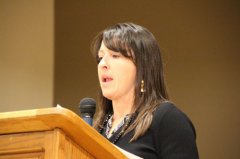 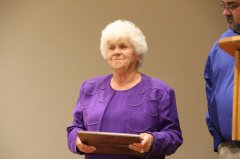 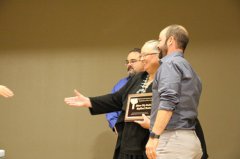 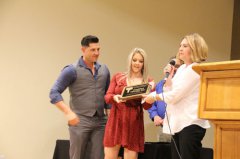 The first part of the presentations at the Silver City-Grant County Chamber of Commerce awards banquet on Nov. 17, 2017 featured awards given out by the PNM Foundation, followed by the chamber awards. However, first on the agenda was to hear from the featured speaker.

Shepard chose as his topic—volunteerism. "It actually raises your life expectancy to be a volunteer. It contributes to the radiance of the soul, contributing to your health. You cannot have true democracy without volunteerism." He said studies have shown that students who volunteer have fewer drug issues, fewer unwanted pregnancies and better grades. "We want to get young people involved."

"Volunteers are less likely to be people of conflict," Shepard said. "The tighter you are in an organization with more involvement, the better you are trusted."

He said he sees a decline in volunteerism. "So, some of our classes at Western require volunteerism. As the university moves toward being an applied liberal arts university, we want people to get out of college, knowing how to think, producing ideas."

Adults, according to studies, change careers at least five times during their work lives, "including into things that didn't exist when they were in college. Today, we can transmit data almost instantaneously. In 2004, I did a tour of the Cleveland Clinic. They had telemedicine."

"Our university cannot be stagnant," Shepard said. "We have an important role to play with you. The role we should be playing is of culture, with movies, lectures, concerts.

"Here in this room on Sunday afternoon, Jim and Debbie Nennich will hold their annual Time for Sharing, a Thanksgiving banquet for those who may not be able to have a dinner themselves. If we want to make this the best community, we need to get more young people to volunteer. The meaning of life is to discover what we are. The purpose of life is giving it away. Never be afraid of unintended consequences. I've learned more from failures. The bigger question is what will I do with that failure. We can be the candle that gives off light or the mirror that reflects life."

Ashburn, with the help of Sayuri Yamada of PNM, announced each award winner. "We make sure we are good stewards, taking care of the assets we have," Ashburn said.

The awards included The Department of Military Affairs 63rd Regional Support Command, which received the top award in the large business category. Their efforts will save 36, 225 kilowatt hours (kWh), enough energy to power five homes for a year.

Snappy Mart received the top award in the medium business category for saving 115,172 kWh, enough to power 17 homes for a year.

McDonald's and Comfort Inn received honorable mention in the medium business category for saving a combined total of 98,388 kWh, capable of powering 15 homes for a year.

Grant County received the top award in the government category for the remodel of the old Walmart building into the Grant County Veterans Memorial Business and Conference Center, where the banquet was held. The county's energy-saving efforts will save 104,499 kWh, enough to power 16 homes.

The Southwest Council of Governments and the city of Bayard received honorable mention in the government category for saving a combined total of 85,832 kWh, capable of powering 12 homes.

The town of Hurley received the top award in the most innovative category for combining projects in two municipal facilities, which will save 16,249 kWh, enough to power several homes.

Chamber Board of Directors Member Jack Herndon announced the Volunteer of the Year. Herndon said the volunteer coaches and mentors young ladies involved in the USSSA and the youth girls' basketball programs. He gives presentations in schools and the community on being active and healthy. When the coordinator of the Senior Olympics had to step down, the Grant County Volunteer of the Year stepped forward and had led the program. He also helps with the state and national Senior Olympics.

The award went to Mario Quintana, who was unable to attend, so his daughter Tiffany Kester received the award for her father. "My dad wrote a statement that I will read: 'I am honored and humbled. Thank you to you who nominated me. I look forward to my opportunities to volunteer, especially with youth and seniors. Congratulations to all those awarded.'"

Board Member Sabrina Pack recognized "a special woman. She has said: 'There is no greater blessing than being able to help someone in need.' She has served the community in a multitude of ways. The late Linda Kay Jones left a legacy of humanitarian work in Grant County. So, this award has been named the Linda Kay Jones Humanitarian Award. The winner of this award is Donnie, Mrs. Forman. One of the nominating letters stated: 'One of the people that makes this area such a great place to live is Mrs. Donnie Rook Forman. There is never a call for help in the Mimbres Valley when Donnie hasn't been there with some kind of assistance.'"

"Her family and we wanted to surprise her, and we knew we could because she receives no newspaper," Pack said. "The Silver City Daily Press has given you a one-year complimentary subscription."

SkyWest Media owns Silver City Radio, which includes KNFT-FM, KNFT-AM and KSCQ-FM radio stations. The five-person team has worked with hundreds of local business clients and dozens of regional and national clients in the area of broadcast media.

The winner recently produced two videos that are successfullymarketing Silver City and Grant County. Seawolf said: "Silver City Radio was awarded special recognition at the state level from the New Mexico Broadcasters Association for the stations' digital social media integration of broadcast and digital marketing for work done for the Tour of the Gila (bicycle race). It was recognized as Small Market Radio Station of the Year for public service announcements. And just this week, Silver City Radio/SkyWest Media was honored as a top five finalist in broadcast media at the New Mexico Hospitality Association's annual Top Hat Awards program in Albuquerque."

Ted Tucker, owner of SkyWest Media said his five-person team has filmed even more areas of Silver City and Grant County this year, he said.

Board Member Dan Cook introduced the Grant County Large Business of the Year by saying they made it look pretty simple to start a business.

"Amplified Therapy is a family-owned healthcare provider focused on providing therapy services in rural New Mexico and Arizona," Dan Cook read. "The company began in 2013 in Cliff, New Mexico. During the past four and a half years, Amplified Therapy has demonstrated an ability to move the company forward as evidenced by the growth it has achieved."

On July 1, 2017, the business began operating as a New Mexico Department of Health, Family Infant Toddler Early Intervention provider. The program offers free early intervention services to families in the four-county area of Grant, Hidalgo, Luna and Catron counties. Amplified Therapy works directly with the four-county area schools, with contracts as far away as Reserve and Morenci and Duncan in Arizona. The business started with one employee in 2013 and now has about 54 employees and independent contractors."

Derek Ratcliff, board member and incoming chairman of the board for 2018, introduced the "big award, the Citizen of the Year. It is being awarded to a gentleman who exemplifies the best qualities of life in Grant County. In recent years, our award winner has served as president of the Grant County Prospectors, he is on the board of directors of El Refugio Domestic Violence Shelter, has served on the board of Grant County United Way, is a member of the Freeport-McMoRan Community Investment Committee, is past board member of the Mimbres Regional Art Council, as well as working with the chambers of commerce in Lordsburg and Deming and is on the board of directors of Big Brothers/Big Sisters."

"While raising a family, doing a great job for his employer and working to help local organizations, our winner also found the time to graduate from Western New Mexico University's school of business with honors," Ratcliff read. "Help me welcome a remarkable person, our 2017 Grant County Citizen of the Year, Mr. Bruce Ashburn."

Ashburn said a person is the reflection of people you work with. "It's what makes Silver City such a wonderful place—all of you. The chamber was on the verge of closing, but we brought in Scott Terry. Now we're doing well and trying to market this wonderful facility."

Terry presented a token of appreciation (in an envelope) to Ashburn for serving as chairman of the board. "You are a great leader."

Ashburn concluded the evening by thanking the sponsors, PNM, W and N Enterprises, and Wrangler's Bar and Grill, which catered the dinner.

Check out a new column that will talk about the town of Silver City and its news and services.