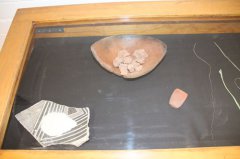 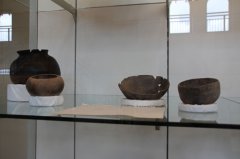 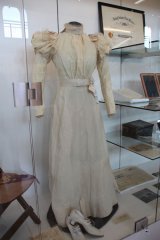 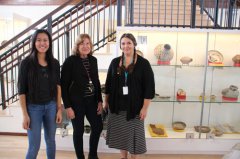 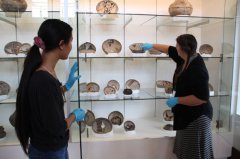 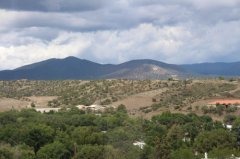 [Editor's Note: Members of the press were given a pre-preview of the WNMU Museum to entice people to vist during the limited preview.]

Fleming Hall, which was built 100 years ago in June, 1918, has housed basketball games and classrooms. Faint basketball lines are still slightly visible on the original maple floors, which have been recently refinished.

Museum Director Cynthia Bettison said the museum, which will close again immediately after the limited preview, is striving for a grand opening next year during the Clay Festival, along with the museum's traditional Black-and-White Gala.

Several of the display cases show the step-by-step pottery making process, with fired and unfired pieces. On the wall across from these cases visitors will see a timeline from the early agricultural period to post-classic, according to Bettison.

The exhibits are designed with new glass and steel display cases to show off the artifacts, which include the largest Mimbres pottery collection in the world.

"It won't look the same as people who have visited many times expect," Bettison said. "The cases are made to focus on the pots and other artifacts."

She said it is taking a lot of work to put the museum "back together. But what you see today is the basis of everything that you will see."

Another case shows the maize beer process. Pots in another case provide samples of the general Mogollon area pottery, pots from Casas Grandes, polychrome pottery, and slip pottery, which mean painted on the surface.

Fleming Hall was part of the New Mexico Normal School, founded in 1893. It is named after Col. John W. Fleming, then mayor of Silver City.

Per newspaper articles at the time, the land was donated was donated by townspeople to the Town of Silver City and then given by the Town Council to the NM Normal School at Silver City Board of Regents. Fleming was Mayor and a member of the Board of Regents at that time, and J.P. Carr, Town Finance Director (really Town Manager) was the Secretary of the Board of Regents at the time. The Board accepted the donation from the Town at their meeting, which was a few days before the Town Council took official action to donate the land.

The renovated museum lets the outside in with views in three directions to let visitors see the environment of the hall and the university, out to the mountains in the distance.

A small gift shop, in the planning stage, will offer items for visitors and guests. History of the creation of what is now Western New Mexico University will be highlighted, and a small mining museum, will feature what brought the city into being and caused the area's development.

Featured items for the preview include a notebook of Bettison's archaeological field notes when she worked at the Nan Ranch in the Mimbres; items from Harry Shafer, who was the principal investigator from the Texas A & M field school at Nan Ranch; as well as recognition of former U.S. Senator Jeff Bingaman, who grew up in Silver City. Bettison called the case, "director's and staff's choice."

As part of the upgrading of the museum, graduate students in the future will choose a piece of pottery and research its provenance and history. "I want students to be engaged. They will be able to Instagram and Snapchat their work. It will engage people who come to the museum. We want to truly be a university museum."

The main floor of the museum is on the third floor of the building. On the top floor, the fourth floor, the director plans an interactive exhibit for parents and grandparents and students of all ages. Lower floors were classrooms and will be exhibit spaces.