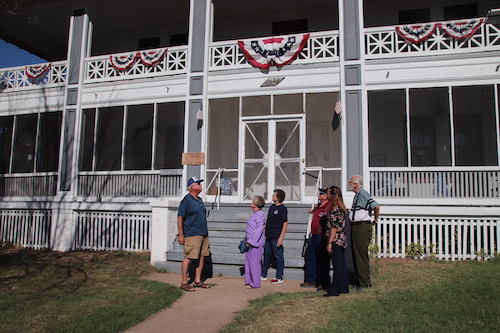 [Editor's Note: This author has taken part in efforts to preserve Fort Bayard for many of her years living in Grant County, and she is beyond excited at the approval of this lease.]

Santa Clara, after many years of work, and many trips to Santa Fe, had its 99-year lease with the state of New Mexico approved by the Board of Finance this morning, Dec. 17, 2019.

Mayor Richard Bauch said they had talked to Lt. Gov. Howie Morales, who "congratulated us. He and General Services Department Cabinet Secretary Ken Ortiz were very helpful in getting us to this happy point."

"We made a presentation," Bauch said. "Everyone on the board was supportive. They had looked at our business plan and were happy we had a good approach."

Mendonca said: "It is so exciting. The work definitely begins now. We'll be doing touring and making sure we are following the steps and staying ahead of requirements. When I say touring, there are many examples across the country where federal agencies have moved into historic buildings in order to preserve them. We will visit them and model our process on what worked for them. I'm super happy the way this went today."

Also in attendance to support the effort was Santa Clara Clerk Sheila Hudman, whom Bauch said is the one who has done all the work.

Southwest New Mexico Council of Governments Executive Director Priscilla Lucero has also worked hard on the communication between Santa Clara and the state. "This is one of the best examples of intergovernmental coordination efforts among federal, state and local governments."

Grant County Manager Charlene Webb attended to support Santa Clara and said: "I think this is a tribute to all the hard work of Santa Clara to preserve the historic Fort Bayard. I'm pleased to see this happen."

Members of the Fort Bayard Historic Preservation Society, who have participated for more than two decades in the fight to save Fort Bayard, also attended the lease approval meeting this morning. They included Dr. John and Cecilia Bell, and Lorie Hildebrand, whose recently departed husband Harry "Rocky" Hildebrand, a two-term Santa Clara trustee, served as the supervisor and worked right alongside two AmeriCorps teams and with Youth Conservation Corps teams to stabilize and secure the historic officers' quarter structures, built in the early 20th Century, around 1910-11, while the facility was still in federal hands.

A brief history of Fort Bayard follows:
After the Civil War, General Carleton requested a new fort in southwest New Mexico, to be named Fort Bayard, in honor of General George D. Bayard. The purpose was to protect miners and settlers from Apache attacks, as Apache homeland encompasses the property. Fort Bayard was established on Aug. 21, 1866 by the 125th U.S. Colored Troops Company F, under Lt. James Kerr. Other companies of the U.S. Colored Troops of the 9th Cavalry Regiment, continued to arrive, and construction commenced.

Over the years, many structures filled the campus. Those still existing include the Nurses' Quarters where nurses lived during the early years, as Fort Bayard continued to develop as a medical center to treat tuberculosis and other diseases soldiers developed during times of war and peace. It continued as a military facility through 1900, when it was transferred to the Surgeon General's Department. In 1922, the hospital became a part of the Veterans Bureau. During World War II, it became partially reactivated as a military installation and a number of German prisoners of war were held at the fort from 1943-45. The hospital's last permutation was as a state of New Mexico hospital under the NM Department of Health. In more recent years, after the construction of the new Fort Bayard Medical Center off campus, the buildings became vacant and deteriorated, and the hospital was demolished.