This spring, with the absence of real-life racing due to COVID, Project Echelon Racing, a domestic elite team and veterans non-profit, provided a platform for Pro Road Tour teams and race promoters to connect and compete at a high level, virtually. Now operating as Echelon Racing Promotions, a subsidiary of Project Echelon Racing, the organization has announced that they will be continuing their work to enhance the sustainability, scalability and visibility of in-real-life cycling and its stakeholders through esports in a premier league format during the sport's offseason.

Cycling, as proposed by the Rapha Road Map, has long yearned for the opportunity to have a set calendar and team rosters that allows fans to follow their favorite teams and riders as they compete at the highest level. Such a model would allow for greater visibility and marketability of the teams, the racers, the races, and their sponsors. Now, Echelon Racing Promotions is bringing that proposal to life and, in the process, is growing a stronger, more highly connected ecosystem for the sport of cycling.

"I would like to give out kudos to Eric Hill and Frank Cundiff and to all the folks at Project Echelon Racing for keeping road racing alive during these uncertain times of COVID-19. As first-time race directors, Eric and Frank did an amazing job organizing and promoting the 3 races they put on this past spring, the Virtual Redlands Bicycle Classic, the Virtual Tour of the Gila and the Virtual Joe Martin Stage Race. Now, with the Echelon Racing League, they are moving the needle even further and we cannot thank them enough for including the Tour of the Gila in the upcoming virtual calendar. I strongly believe what they have created is something special and that it will help to grow our in-real-life racing to a new level." - Jack Brennan, Tour of the Gila

Brennan, Tour of the Gila race director, said the modified virtual race of the Tour of the Gila, will include the Mogollon Road Race, the downtown criterium and the Gila Monster.  A local cyclist will use the Strava App to record the race routes, their curves, turns, inclines and declines, and they will be overlaid on the virtual route to make it as "real" as possible.

Brennan also said he is already in the planning stages for the 2021 Tour of the Gila.

According to Eric Hill, the Echelon Racing Promotions' President, "In a post-event survey it was shown that 82% of teams and riders who competed in the events this spring would be motivated to participate in similar events during the offseason. Additionally, 75% of team directors reported equal or greater engagement from followers and fans during virtual events as compared to IRL events and that their sponsors were pleased with their team's involvement. With those statistics in mind, we knew we had an opportunity to enhance the image of our sport and all of the amazing people and stories that surround it, so we wanted to continue to move forward."

The mission of Echelon Racing Promotions is to embrace esports to enhance and globalize the sport of cycling by promoting races for the racers and their fans. Through the visibility brought to teams, race promoters and other stakeholders, the goal is to give cycling fans across the globe the opportunity to follow their favorite riders and teams through an engaging product that motivates more people to embrace the sport. 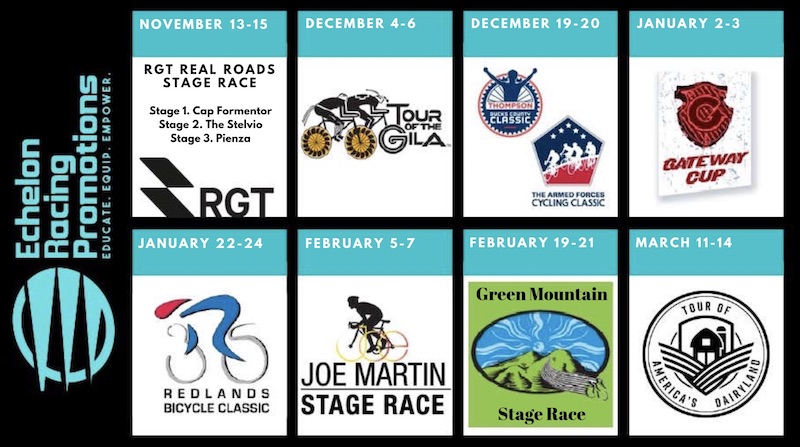 Working in partnership with the virtual platform RGT Cycling, the National Association of Professional Race Directors (NAPRD) and USA Cycling, Echelon Racing Promotions has developed a diverse eight (8) race calendar, using modified, virtual versions of real-life courses. Competition will take place from November through early March. The Echelon Racing League is set to feature 20 of the top men's and women's teams from across North America, as well as select esports and international teams who have aligned themselves with the league's mission and vision, who will all race in-game in their real life kits.,. The league will recognize individual race winners, as well as an overall series competition, and will feature a $10k prize list, with equity to men's and women's series. With real money on the line, an Echelon Racing League governance model is being developed in collaboration with USA Cycling and other national cycling federations to ensure safe and clean sport for all, an objective largely being managed by the organization's Director of Operations, Frank Cundiff.

According to Cundiff, "one of the more exciting elements of the Echelon Racing League is the opportunity for amateur and recreational riders to get involved." Echelon Racing Promotions is working alongside event promoters and USA Cycling to provide categorized races for USA Cycling members on the RGT platform. Additionally, there will be an opportunity for elite riders and their teams not a part of the league to "race off" for the chance to compete as wildcards in the professional races. Not a racer? No worries. Echelon Racing Promotions is working directly with its in-real-life race promoter partners to offer community fondo rides to support the Project Echelon veterans non-profit and additional charities of their choice.

The Echelon Racing League is set to provide engaging racing and viewership, with production and broadcasting being done by Mark Zalewski and Brad Sohner, a team familiar to professional cycling in North America. Additional partnerships from series partners will further enhance viewer engagement as exclusive discounts and promotions will be made available throughout the broadcast.

Two other racerelated folks talked about their feeling of honor at being included in the initial virtual race series.

"Tour of America's Dairyland p/b Kwik Trip is honored to be included in this group of eight race weekends and many storied race events on a national scale in America! In our ongoing search to find year round relevance for our varied stakeholders, whether they be our sponsors, racers, host cities or our many loyal followers and fans, an off-season event like this one being created by Echelon Racing Promotions is a perfect way to keep everyone engaged and gain greater traction for our sport of road racing virtually and in-real-life!" - Bill Koch, Tour of America's Dairyland

"The Joe Martin Stage Race was honored to be included in the initial virtual race series and see great value in having both an e-racing along with the live in-person race. The Echelon Virtual Racing league will allow the JMSR to continue to expand and promote our brand, Fayetteville, Arkansas and our sponsors. We are excited to make new fans and give our many current fans, who we've developed over 42 consecutive years of stage racing, an additional opportunity to support us. It's an exciting time for the sport of professional cycling in the USA and we look forward to the many opportunities this innovative platform can contribute to the growth of our sport. Bruce Dunn, Race Director – Joe Martin Stage Race."

Four NEW classifieds for furniture and an REI screen house